‘Dan White murdered my friend’: When anger boiled over into violence at City Hall and San Francisco police raided a Castro bar

On May 21, 1979, thousands of members of San Francisco’s predominantly gay Castro District community took to the streets to protest the lenient sentence received by Dan White for the murders of local politician and gay rights activist Harvey Milk and Mayor George Moscone. Their anger–combined with the actions of police who arrived to quell the scene–soon boiled over into rioting. The resulting violence affected San Francisco’s LGBT community for decades to come.

Harvey Milk rose to prominence as a gay rights activist and became the first openly gay person elected to a public office in the state of California when he was elected to the San Francisco Board of Supervisors in 1977. His murder, as well as that of Mayor Moscone, devastated not just the gay community, but the city as a whole.

Dan White was a former member of the Board of Supervisors who had clashed with Milk during their time serving the city together. In November of 1978, White resigned from his post, but changed his mind and asked to be reinstated. Mayor Moscone denied the request–with Milk lobbying against White’s reappointment. On November 27, White entered City Hall through a basement window and shot both men to death in their offices.

Six months later, White was convicted, not of first-degree murder, but voluntary manslaughter. White’s defense team had pointed to his diminished mental capacity and emotional state at the time of the murders, as indicated by the once-health conscious White consuming too much junk food– a ploy that became known as the “Twinkie Defense.” The jury-predominantly white, Roman Catholic and heterosexual—bought into it, recommending the lesser charge, which led to a sentence of just 7 years and 8 months. 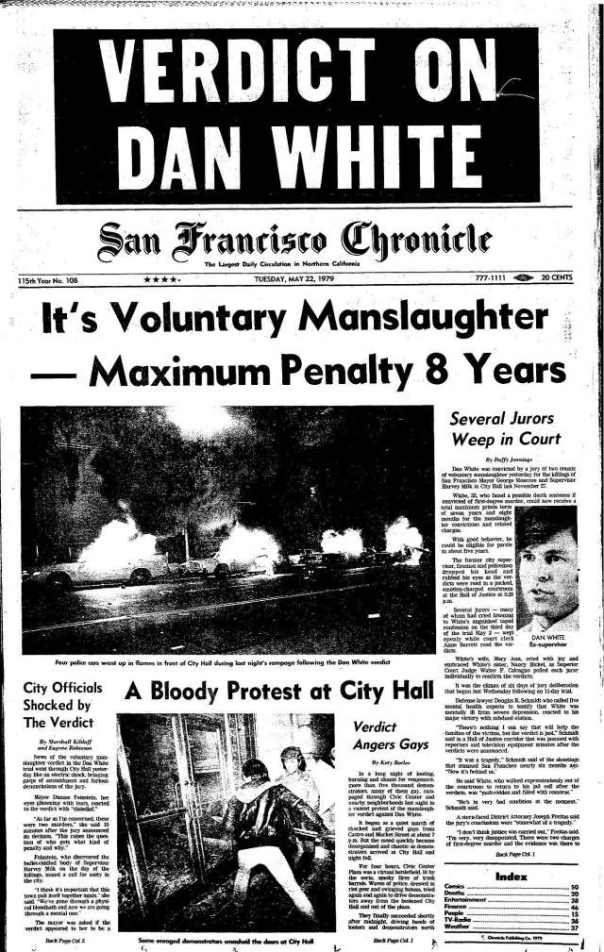 When news of the verdict broke on the night of May 21, Cleve Jones–a close friend of Milk’s who would eventually go on to become one of the creators of the AIDS Quilt–spoke to a crowd of about 500 gatherers on Castro Street, and a peaceful march was quickly organized. By the time the crowd of protestors had made its second trip around the block, they were 1,500 strong. They then marched to City Hall, where their numbers expanded to an estimated 5,000.

As the crowd grew, so did the anger. Police soon arrived to try to control the situation, but that only served to enrage the crowd more. The police had raised over $100,000 for White’s defense–he was a former police officer–and many in the community believed the department had conspired to reduce White’s charges and sentencing. Although ordered to simply hold the crowd back, many officers began attacking the protestors with night sticks. Many had even taped over their badges, so as not to be identified.

Chaos erupted, as the crowd fought with police and destroyed a dozen police vehicles, as well as parts of City Hall itself. After three hours, officers moved in to quell the rioting for good, using tear gas in the process, and the crowd dispersed. In all, 59 officers and 124 protestors were injured, with about two dozen arrests made.

Hours later, several police officers gathered on their own to raid the Castro neighborhood, vandalizing a local bar and assaulting patrons. They shouted anti-gay slurs at the victims, and eventually turned their attention to attacking anyone that happened to be out on Castro Street.

After two hours, Police Chief Charles Gain was made aware of the rogue officers’ activities, and he made his way to the Castro to put a stop to it. No officers were reprimanded for the attacks, as officials were never able to determine who had ordered it, but the violence was finally over.

The next day, on what would have been Milk’s 49th birthday, 20,000 San Franciscans gathered to remember him. That October, more than 75,000 people marched for gay rights in Washington, D.C., and gay rights activists from around the country were inspired to continue their fight.

In San Francisco, the riots led to a wave of political changes, as more and more LGBT politicians were elected over the next decades. LGBT presence on the police forced also dramatically increased, and has continued to increase to this day.