The answer lies in the makeup of a man as well as LGBT people at large. 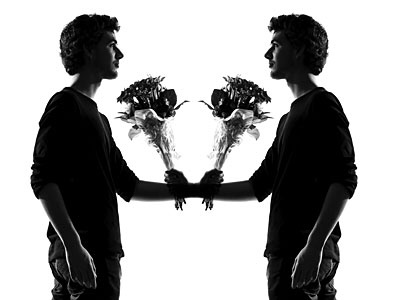 If you have ever taken a walk down Santa Monica Boulevard in West Hollywood, Boystown’s North Halsted Street in Chicago, or even Chueca’s Gran Vía in Madrid, you have likely seen it: the attack of the clones. And I am not talking about some gaymers going crazy over the latest George Lucas screening.

We have all seen our share of guys in the gay world who cross a seemingly incestuous line between looking so similar they could be brothers and boyfriends. Whether it is some gym bunny who is dating another protein-obsessed jock, a hipster with another skinny-jeans-wearing, glasses-clad ironist, or a twink who is dating another boyish-looking guy, there are lot of guys who tend to date what seems like a mirror image of themselves.

And that is not to disparage any of the aforementioned groups. However, it leads one to question: Why is this such a phenomenon among gay men?

The answer, I believe, lies deep in the struggle of coming out. While growing up, many of us — especially those of us from small towns — tried fitting into a straight paradigm. We grew up with our straight friends, assuming that we would grow up, fall in love with a woman, get married, and procreate. For this reason, some of us around puberty had a hard time reconciling what was hardwired in our brain and what our genitalia was telling us, because in all other aspects, we are just like our straight counterparts.

I can recall the exact moment in my middle school years when I tried to reconcile these two aspects of my life. At the time, I most certainly had a crush on this one guy named Kyle who I swam with on my year-round club team. I would often have to avert my stares at him when he looked my way, embarrassed that I had just caught a glance of his muscly features in a Speedo.

Yet, at an awkward tweenage party — the kind that only acne and newfound hormones could create — I saw all my friends “falling in love” with girls. It suddenly hit me that I had never felt about a girl in that way. Feeling left out, I decided I needed a girl crush. So I looked over at my nearby friend’s newly developed boobs and decided I was head over heels for her. After all, that was what I was supposed to find attractive, right?

Naturally, I was lying to myself due to social pressures. And this is a common occurrence in the gay world. There is a reason that the term “gold star gay” — a gay man who has never slept with a woman — exists. We all take our own path to realize that when it comes to sexuality, we are different. And for some of us, it takes a relationship with a girl.

But when we get out of this straight paradigm, most gay men seem to seek perfection in a relationship. After finding how much easier and natural same-sex relationships are for us, some of us raise our standards so incredibly high that only a clone of ourselves will do.

Yet, this unfortunately can, and often does, invite a variety of problems. Above the tendency to serial date, the search for perfection causes a social strata among gay men, starting with the infamous “Masc4Masc” category on dating sites. Wanting only a “real” man, this guy goes out of his way to act “straighter” than straight men and date only those who are the same — he forgets, of course, that straight men want a vagina and not his penis.

Then there are the racially motivated messages on dating profiles and hookup sites, such as “no Asians” or “no black guys,” etc. Wanting only to date a guy of a particular race (most likely his own), this man swears he is not racist, but rather that skin color is a preference just like one’s personality or astrological sign.

Last but not least, there is the message that says “no fats.” While it is understandable that this guy may be simply concerned that a potential partner could just die of a heart attack at age 40, that is probably not his motivation. A guy with a healthy body image who has a little bit of pudge disgusts him, as he seeks only a man with the abs of a go-go dancer and the arms of a construction worker or lumberjack.

Of course, many believe that these three examples are really just preferences and not problematic. After all, gay clone couples show the happiness and fulfillment of standards, right? I choose to respectfully disagree — rejecting anyone who is not Prince Charming riding down Santa Monica Boulevard, you are rejecting reality for a fairy tale. Enjoy a man who is exactly like you or a man who is your polar opposite, but always acknowledge that no man or relationship is perfect.