Via The Comics Reporter, the website Shorpy has a  great collection of photos from the 1920s of the Krazy Kat club, a Washington DC hangout/speakeasy that appears to have been quite a hub of bohemian activity. The police busted it more than once. The clientele included college kids, flappers and gays. A diary by a gay man kept in 1920 refers to the Krazy Kat club as a “Bohemian joint in an old stable up near Thomas Circle … (where) artists, musicians, atheists, professors” congregated.

The gay angle is worth pondering because of the club was named after the comic strip Krazy Kat (who can be seen on the door sign in the photo above). Krazy was the first androgynous hero(ine) of the comics: sometimes Krazy was a he, sometimes a she. As creator George Herriman stated, Krazy was willing to be either.

Is it possible that Krazy’s shifting gender identity made him/her an icon for gays?

Or it could be that the owners just liked comics. The building that housed the Krazy Kat club remained a gay hangout for decades to come and also held on to its connection to comics: it was later renamed The Green Lantern.

It’s also the case that Krazy Kat attracted outsiders of all sorts, not just gays. In the 1930s in Chicago, there was a Krazy Kat club organized by teenage African-Americans, also interesting in the light of the fact that Herriman had some black ancestry and used African-American themes and motifs in his strip.

Turns out that back in the 1920s there was speakeasy in Washington D.C. that served its bootleg cocktails in a treehouse.  It was named the “Krazy Kat Klub” after the character in a popular comic strip created by George Herriman.

The club was run by Cleon “Throck”  Throckmorton , an artist who later became a stage set designer.  It was a hipster haven for the counterculture,  the avant garde,  the artsy set.

This excerpt from a 1922 article in the Washington Times on Throckmorton and his “Krazy Kat Klub” was written by Victor Flambeau. He describes the club as  “a most spooky sort of place, weird and crazy as its name.”  A place for “Good friends, a blazing fire, some primitive furniture, hand made no doubt, candles, drinks, eats, a floor to dance upon, a garden annex in summertime, a spreading tree with airy rookeries built in it’s branches.”

I don’t know about you, but it sounds like a really fun place to me!

Below is the entrance to the club, which was actually in an old stable.  Cleon, aka “Throck” is on the right.

And you know those unruly bohemians! Because it operated during Prohibition it was raided many times.

Officer Roberts was under orders to watch the ” rendevous of the Bohemians.”  (great name for a band!) when he heard a shot fired. A raid ensued and 14 people landed in the slammer, mostly for drunk and disorderly conduct.

The article likens the Krazy Kat Klub to a Greenwich Village coffee house,  with gaudy pictures created by futurists and impressionists.   And the people arrested were “self styled artists, poets and actors and”  GET THIS,  “some who worked for the government by day and masqueraded as Bohemians by night.”

The horror! Can you imagine?  Government workers leading double lives!  Who would have thought? 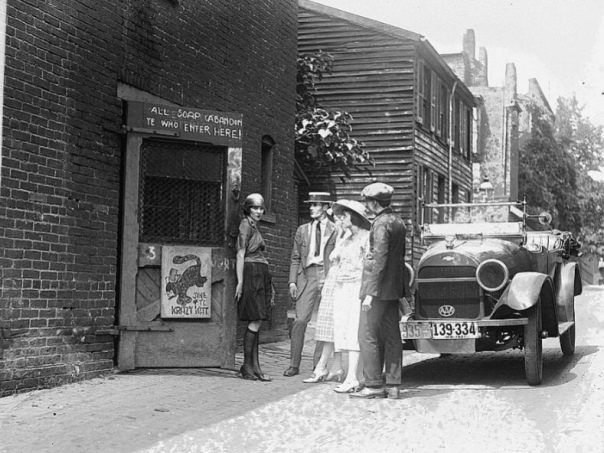 After seeing these photos I so want one of these in my back yard.  Note to self, must add speakeasy treehouse to DH’s “Honey Do” list.

So, what about you? If you could time travel back to the 1920s, would you want to hang out in a place like this?

The Language of Krazy Kat

If you live near a decent book store, you can now buy a copy of George Herriman’s Krazy & Ignatz 1941-1942: “A Ragout of Raspberries”, which gathers together two years of great full-page, colourful Krazy Kat comics. Beautifully designed by Chris Ware, the book also has a substantial essay I wrote Herriman’s writing skills.

In celebration of this new book, I want to quote a very pregnant bit of dialogue that appeared on Jan. 06, 1918 when Krazy Kat and Ignatz Mouse started arguing about the nature of language:

Krazy: “Why is Lenguage, Ignatz?”

Ignatz: “Language is that we may understand one another.”

Krazy: “Then I would say lenguage is that that we may mis-unda-stend each udda.”

(I know what Finns and Laplanders are but I have no clue as to Oshkoshers. Anybody have any idea on this?)

And here’s an excerpt from my essay:

To a striking degree, Herriman drew on the rich oral culture of early 20th century America. Herriman was a cultural magpie, taking his words from diverse sources far and wide, ranging from popular songs to political speeches to the Bible to medical and scientific discourse.

In describing Herriman’s literary skills, it’s easy enough to classify him as a nonsense poet, a coiner of nonce-words and playful gibberish in the great tradition of Lewis Carroll and Edward Lear. But if you pay close attention to Herriman’s language, what becomes evident is that he usually doesn’t make words up, however much he might twist them around. Rather, Herriman had a great ear for speech, for the endless mutations and variations of language as garbled by the human tongue. Herriman’s language was not something he invented in his head; it can be traced back to the world he lived in.

The America Herriman grew up in was much more oral than anything we’re used to. For us, music is something that comes out of a c.d. player or an iPod. In Herriman’s world, people could break out into song all over the place: at parties, at picnics, and in church. All the characters in Krazy Kat are tuneful, especially the eponymous heroine. These songs come from all sorts of genres, ranging from traditional hymns (such as Krazy’s familiar refrain that “there is a heppy land, fur, fur a-wa-ay”) to frontier anthems (“home on the range” gets a workout on July 26, 1942) to bluesy lamentations (when Krazy sings “Press my pents an’ shine my shoes” on July 22, 1935). Herriman also brings in songs from other languages. On July 29, 1941 we hear Ignatz sing to himself “Adios, Chaparrita Chula”. These words (which could be translated to mean “goodbye insolent darling”) are taken from the traditional Mexican lover’s lament “Adios, Mariquita Linda”.

Words aren’t stable, fixed things. They have shades of meaning and shifting connotations. Herriman was supremely alert to the slipperiness of language. Listen to how Ignatz tries to sweep aside Mrs. Kwakk Wakk: “Away, woman away with your gabble and gossip.” (May 25, 1941) Gabble is the perfect word because it denotes both meaningless speech and the low jabber of a duck (which is of course Mrs. Kwakk Wakk’s species).