In the period October 1980-May 1981, 5 young men, all active homosexuals, were treated for biopsy-confirmed Pneumocystis carinii pneumonia at 3 different hospitals in Los Angeles, California. Two of the patients died. All 5 patients had laboratory-confirmed previous or current cytomegalovirus (CMV) infection and candidal mucosal infection. Case reports of these patients follow.

In honor of National Gay Men’s HIV/AIDS Awareness Day, I’m republishing my article on the first report documenting the emergence of the HIV/AIDS pandemic. That article, published in the CDC’s Morbidity and Mortality Weekly Report on June 5, 1981, describes five cases of an unusual form of pneumonia in atypical patients, all young men. The broader social and public health implications of these five cases were not understood at the time of the article’s publication, but would be in just a few unnerving months. In short time, it would become clear that this pneumonia, caused by a tiny fungal organism, was part of a constellation of diseases associated with a novel and highly unusual viral infection that was spreading rapidly through a subset of the American population.

This MMWR article is the first record of an emerging outbreak that, in just one decade, would be the second leading cause of death in young American men 25 to 44 years and have infected over 8 to 11 million people worldwide. As I note in my article, “the June 5th report is a symbol of a time before HIV/AIDS became ubiquitous, before it became a pandemic, before a small globular virus became mankind’s biggest global public health crisis … June 5th marks the beginning of a radical transformation in how disease surveillance and medicine was conducted.” The HIV/AIDs outbreak, since this report’s publication and the growing awareness of the virus, has profoundly changed medicine, public health, virology, and the lives of millions of people. 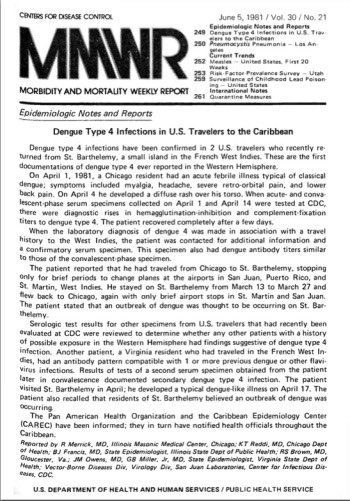 It often seems that gay men are disproportionately, and perhaps unfairly, bludgeoned with HIV educational and awareness campaigns. After all, this virus is an equal opportunist infector infecting both genders of all sexual orientations. And, yes, men that report having sex with other men represent a truly tiny proportion of the United States population, a slim 2% of the three-hundred million that live in this country.

However, as the CDC reports, gay men account for 63% of all newly diagnosed HIV infections in the United States and make up 52% of the current population of people living with a HIV diagnosis. Stopping the continued transmission of HIV/AIDS in this country critically relies on affecting change and promoting awareness among these men. In 1981, we just became aware of the HIV/AIDS virus. Today, we continue to bring awareness to prevention, testing, and treatment of a virus that continues to percolate through the same vulnerable population that was brutally affected nearly thirty years ago.

“Pneumocystis Pneumonia — Los Angeles,” in the June 5, 1981 edition of the CDC’s Morbidity and Mortality Weekly Report, was an economical seven paragraph clinical report cataloging five observed cases, accompanied by an explanatory editorial note on the rarity of this fungal disease. It seemed to be nothing out of the ordinary from MMWR, a publication that has been issuing the latest epidemiology news and data from around the world for 60 years. The report was included in that week’s slim 16 page report detailing dengue in American travelers visiting the Caribbean, surveillance results from a childhood lead poisoning program and what measles had been up to for the past five months.

Since 1978, Dr. Joel Weisman, a Los Angeles general practitioner, had been treating dozens of gay men in the city presenting with a motley collection of uncommon illnesses – blood cancers, rare fungal infections, persistent fevers and alarmingly low white blood cell counts – typically seen in the elderly and immunocompromised (1). In 1980, he was struck by two profoundly ill men and by the similarity of their symptoms, their prolonged fevers, dramatic weight loss, unexplained rashes and swollen lymph nodes. He referred them to Martin Gottlieb, an immunologist at UCLA who just so happened to be treating a gay patient with identical symptoms.

All three men were infected with Pneumocystis pneumonia, caused by the typically benign fungus Pneumocystis jirovecii, and soon Gottlieb would hear of a two more patients with the fungal infection from colleagues (2). The MMWR editorial note accompanying the report of these cases would mention that Pneumocystis pneumonia, or PCP, is “almost exclusively limited to severely immunosuppressed patients” and that it was “unusual” to find cases in healthy individuals without any preexisting immune system deficiencies. The disease would later be cataloged on immunological graphs illustrating the awful decline of the infected – first the CD4+ T-cell count falls as the viral load ascends, then a marching band of viral, fungal, protozoan and bacterial infections capitalizing on the loss of CD4+ T-cells. PCP is now known as a classic opportunistic infection of those infected with HIV/AIDS.

In the first sentence, the report would note that the young men were “all active homosexuals.” These five were all “previously healthy” men in their late 20s and 30s. They did not know each other, they did not share common contacts and they did not know of any sexual partners suffering with similar symptoms.

Three of the men were found to have “profoundly depressed” numbers of CD4+ T-cells. All five reported using inhalant drugs, or “poppers,” common in that era among gay men, which would later serve as a lead into this new syndromic disease (3). Cytomegalovirus, found in the five men, was also suspected as a culprit behind this strange outbreak. The editorial note stated definitively that “the fact that these patients were all homosexuals suggests an association between some aspect of a homosexual lifestyle or disease acquired through sexual contact and Pneumocystis pneumonia in this population.”

By the time the very first report on this acquired immunodeficiency syndrome, which we now know as AIDS, had been published by Gottlieb and Weisman and three fellow physicians in the MMWR, two of the patients had already died.

New reports showed up after the June 5th report, the list of cancerous malignancies and bizarre diseases killing young gay men blossoming in number, seemingly inexhaustible in scope and variety. The first reported cluster was in Los Angeles but by the summer and fall of 1981, reports would trickle in from San Francisco and New York City, and then Miami, Houston, Boston and Washington, D.C. would represent new epicenters.

The July 4th report on 26 cases of Kaposi’s sarcoma, a rare cancer that only appeared in elderly men of Mediterranean descent, in California and New York City was another pivotal report on this new syndromic disease. The entire December 1981 issue of The Lancet was dedicated to the disease and hypothesized on the origins of this immunological deficiency but, tellingly, none of the articles proposed an emerging infectious disease as the culprit. The disparate constellation of diseases seemed to be linked only by their aberrational appearance in men in what should have been their prime, their gay lifestyle, and abnormally low CD4 cell counts. It had no apparent origin, and physicians were scrambling to find an appropriate treatment to decelerate the rapid progression to death.

By December 1981, it became clear that this disorder wasn’t limited to gay men but also affected intravenous drug users, recipients of transfused blood products and immigrant Haitians. The escalating numbers of cases reported daily and the disastrous mortality rate – 40% of patients were dying within a year of diagnosis – began to sow panic in the public health and medical world that soon spilled into the public (4).

It would take three years before the virus was detected and AIDS was definitively linked to an infection caused by a novel virus, human immunodeficiency virus or HIV. In just a decade, AIDS would be the second leading cause of death in young men 25 to 44 years in the United States and would have infected over 8 to 11 million people worldwide (5). The most recent estimate for the number of people worldwide living with HIV/AIDS is 34 million in 2011, with 68% residing in sub-Saharan Africa (6). That year, there were 2.5 million new HIV infections and 1.7 million AIDS-related deaths.

Though the June 5th, 1981 report was overlooked at first, for many years it would be “one of the most heavily quoted articles in the medical literature” (2). And since its publication, we have seen a cataclysmic shift in how the interrelated worlds of public health and medicine view infectious diseases, especially how to prevent, control and educate the public about them.

June 5th marks the beginning of a radical transformation in how disease surveillance and medicine was conducted. In the seventies, the scientific consensus on infectious diseases was that they were largely eradicated, that they were finished. Vaccines had diminished their presence in modern society, and antibiotics and antivirals would sort out the rest. HIV/AIDS changed that mentality and reality. It seemed to come from nowhere, the blossoming epidemic completely unforeseen and unprecedented in its scope. The June 5th report is a symbol of a time before HIV/AIDS became ubiquitous, before it became a pandemic, before a small globular virus became mankind’s biggest global public health crisis.

Author’s note: This article was originally published in January 2013 at the Pump Handle blog as a part of a series on “public health classics,” exploring some of the classic studies and reports that have shaped the field of public health. Check out the original article here.