Take a look at Akbar and Jeff, a gay couple created by Matt Groening far before The Simpsons

Before Matt Groening created The Simpsons, he was drawing a neurotic rabbit and a same-sex couple who both dressed like Charlie Brown.

In 1986, Life In Hell’s Akbar and Jeff predated Homer, Marge, Bart, Lisa and Maggie and they were remarkably ahead of their time.

Groening had started drawing Akbar and Jeff in the fifth grade. Years later, in 1986, he drew this comic strip where the two came out to each other.

Wearing matching t-shirts, shorts and fezzes (it was the 80s), the boyfriend twins quickly formed into the alternative comic world’s iconic same-sex couple.

‘My friends and I were trying to draw Charlie Brown,’ Groening said in the late 80s. ‘We tried to imitate Peanuts, and they never came out looking right. And so eventually those drawings mutated into Akbar and Jeff.

‘They still have the Charlie Brown shirt if you noticed. Later I was trying to think about what kind of people they were and finally realized, of course, they’re gay, they’re lovers.’

While outing Akbar and Jeff as a gay couple meant there was a backlash, Groening kept drawing them in the Life In Hell comic book series.

A beer company had approached Groening to see if they could use Akbar and Jeff as mascots.

‘Then the article in Rolling Stone came out about me, and it was revealed that, “Oh my god. Akbar and Jeff – they’re not normal.” And the beer company dropped Akbar and Jeff,’ Groening said.

‘I said, “Listen, these are cartoon characters. It’s not that big a deal.” S

Groening said he wanted to have a same-sex couple in the series, but thought having a straight couple would end up using lazy jokes about men and women.

‘No one can accuse me of trying to score points against men or women if the characters are identical,’ he said.

Life In Hell continued until 2012, and in that time Akbar and Jeff’s relationship kept being explored.

Akbar and Jeff, for the secondary stars of an alternative comic, also inspired many.

How Matt Groening’s Akbar and Jeff were inspirational

Scott Craig and Peter Alexander, a gay couple from Silverlake, created a LGBTI music venue Akbar – a tribute to the comic. Alexander had previously worked for Groening.

‘This is literally how me and my boyfriend got together,’ one guy said on Reddit.

‘When I was 14 I was sleeping over at a friends house & we were high and giggling over a Matt Groening book I’d got earlier in the day at a church book sale.

‘Turned page, this comic came up. We both got a little quiet. Heh…heh… Haltingly, friend said “Ummm hey….are you….gay?”

‘”Maaaaaaaybe” says I. And that was the first night of many that we made out that summer!’ 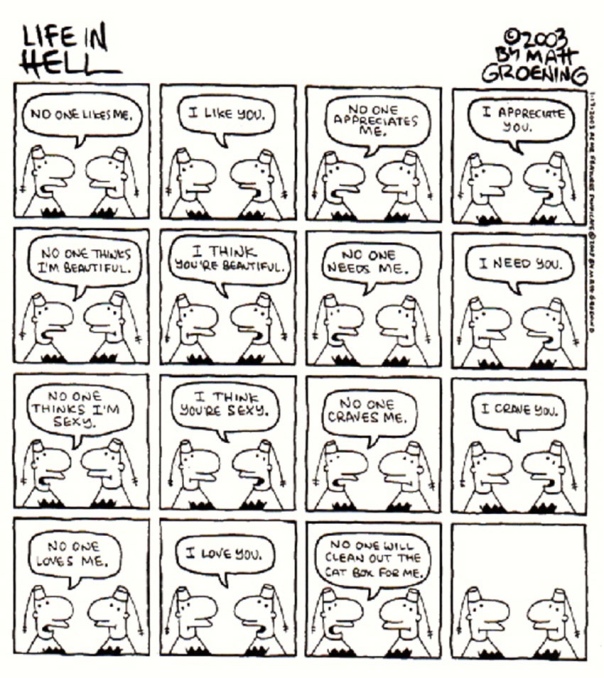