The Wall is the most infamous gay pickup strip in Sydney. There are probably others – but this 100m of convinct built sandstone wall has a unique synergy. It runs along the eastern boundary of the old Darlinghurst Gaol commencing at the rear of the Supreme Court of NSW. Street prostitution is illegal in Sydney, whether it be same sex or mixed.
The wall (all four legs of it) was designed and constructed under the aegis of Francis Greenway from 1820 to 1822 but he, being a convict, was removed from the project, no matter his architectural gifts to the colony under Governor Macquarie. Convict markings can be seen in the sandstone blocks all along The Wall. They were used to ensure that each man did his fair share and did not slack off. Progress was painfully slow, however, in 1841, existing prisoners were marched from the original Sydney Gaol near the corner of George & Alfred Streets (the site of the current Four Seasons Hotel) to the partially erected Darlinghurst Gaol on a hill overlooking the colony from the SE.
So, what is the graffiti? It is not actually on The Wall but just around the corner in Burton Street. It is tempting to see it as man and boy – but that is my flight of fancy. And note that the graffiti is on concrete “implants”. Maybe the man with the spray can valued the sandstone more than the government who contracted out repairs to this historic structure.

A Sad Story From The Wall


“Chapter closes on the sad story of a missing teenage prostitute

Arron James Light ran away from his inner Sydney home when he was barely 15.

To support himself on the streets and have what police described as a “fun time”, he became a teenage prostitute working the infamous Wall at Darlinghurst.
But in 1997, aged 17, he disappeared without trace after turning key witness to a special police task force investigating pedophile rings in Sydney. The task force also went on to hunt down and extradite infamous pederast Robert “Dolly” Dunn from South America for successful prosecution.
For seven years, Arron’s disappearance remained a mystery. Then, four weeks ago, workmen clearing a bush-covered vacant block at Sydenham for use as a park unearthed skeletal remains in a shallow grave bordering the Alexandria canal.
Arron had been stabbed at least six times in the chest. His killer wrapped his body in a tarpaulin before burying it. Police who viewed the scene believe his body would never have been found had it not been for the workmen.
DNA tests yesterday confirmed Arron’s identity to Newtown detectives, who informed his parents of their worst fears since they reported their son missing in December 1997.

Detective Inspector Ian Lynch said yesterday that Arron was crucial to a prosecution brief being prepared at the time against alleged members of one of the rings and was also an alleged victim of pederasts.

He said charges against four men were dropped as a consequence of his sudden disappearance.
It is understood that Arron’s allegations related to a pedophile ring dubbed “Circle of Friends”. The group is also known to operate in Britain, where juveniles preyed on have also been murdered. Detective Inspector Lynch said that, while police had evidence to suggest that Arron was involved in drugs and that it was possible his lifestyle could have contributed to his death, the firmest lead police still had was that he had turned key witness.
Detective Inspector Lynch said his new investigation, code-named Operation Valley View, had spoken to associates of Arron and former officers involved in Task Force Shad, who were convinced his disappearance related to their investigations.
“Arron was known to frequent the Wall area of Darlinghurst and Darlinghurst Road as well as Kings Cross, Botany, Rosebery and Bourke Street, Darlinghurst, where he shared a place with a group of other people,” Detective Inspector Lynch said.
“Inquiries have revealed that he was last seen alive in August 1997 before he was formally reported missing in December that year by his family, whom he kept in regular touch with despite his lifestyle.”

Green Park, in Darlinghurst Road, was named after Alderman James Green, who represented the district from 1869 to 1883, although it is often thought that the park was named after Alexander Green, one of Sydney’s most notorious hangmen, who lived in a whitewashed hut outside the eastern wall of nearby Darlinghurst Gaol, in what is now Green Park.

In the 1860s the site was set aside for ‘accommodation for aged and infirm females’ but when these plans fell through, the site was given to the City Council in 1875 for a ‘public recreation ground’. In the centre of the park is an ornate bandstand, erected in 1925 for concerts which were a common feature of the interwar years. A memorial to the surgeon Victor Chang, who performed Australia’s first heart transplant at nearby St Vincent’s Hospital in 1984, and died in a bungled extortion attempt in 1991, stood in the park for some years. It was later moved to the Victor Chang Cardiac Research Institute nearby.


The park has also had a long significance for Sydney’s gay community. The Gay and Lesbian Holocaust Memorial – a pink triangle with black poles – sits on the western side of the park, commemorating those lesbians and gay men who were killed by the Nazis during World War II. Gay Fair Days have been held there; the AIDS Memorial Candlelight Rally has started there; political demonstrations have been called there; public meetings have been held there to discuss issues of concern for the local gay community. One of Sydney’s best-remembered gay restaurants, on Oxford Street, called itself the Green Park Diner so that it would attract a gay clientele. And one of the most sacred possessions of the Sydney chapter of the Sisters of Perpetual Indulgence is part of the urinal of the toilet that was located on the beat there, in Darlinghurst Road . Even though the toilet was demolished – and the urinal spirited away in the dark of night – the beat, as they say, goes on.
Sexual adventures have always been part of Green Park and its history. Part of this unusual history has to do with Green Park’s unique location; part of it has more to do with the social history of gay men’s need in general to ‘subvert’ public space for their own purposes. This is true of where and how gay men could meet, particularly in the period before decriminalisation of homosexual acts in 1984. Denied the possibility of meeting other gay men openly at institutions commonly used by heterosexuals for such purposes – at work, at local churches or social clubs, at the P&C Association, at sporting or bridge clubs, for example – gay men found it necessary to use various public spaces to meet others. Thus parks, beaches, promenades, quiet bush walks, or open woodlands, known as beats in gay parlance, have all been used by gay men at some time or another as discreet places for meeting other gay men. Sexual access has often been an important purpose for such beats, but beats have always played an important role as mere meeting places for gay men, since legitimate commercial venues for meeting other gays have emerged only in the very recent past. And many such places were of dubious legality, and subject to police attention: we perhaps ought not enquire too closely about how they were able to continue to operate.
Thus, in Sydney, virtually any park (and in particular those in the inner-city area, where population densities are highest), has served, and in some cases, still does serve, as a beat. Green Park, and ‘The Wall’ – the stretch of Darlinghurst Road from Oxford Street to Burton Street – should be seen in this tradition. The location in Darlinghurst, between Kings Cross and Oxford Street, has meant that there have always been men walking back and forth between these two areas, both known for their nightlife. Indeed, it is this central location of the park, in a residential area with a high transient population, that has meant that Green Park has served as a focal point for men meeting men over much of the twentieth century. 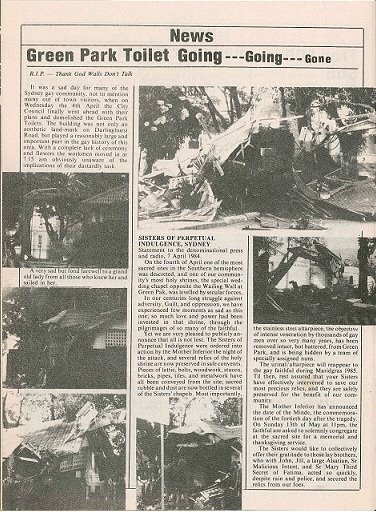 Once the residence of Alexander Green, hangman of Darlinghurst Gaol, Green Park is a cheery space during the day, but as the many syringe-disposal bins attest, it’s best avoided nocturnally. At the top of the slope, the inverted pink triangular prism backed by black pillars is the Gay & Lesbian Holocaust Memorial.

The memorial was founded by the late Dr Kitty Fischer, who as a young Jewish girl in Auschwitz was kept alive by food smuggled to her by a gay inmate forced to wear the pink triangle. In a lower corner of the park is the Victor Chang Memorial – before he was murdered in 1991, he was a famed heart surgeon who worked at neighbouring St Vincent’s Hospital.

The Sisters of Perpetual Indulgence, and “That!” Urinal 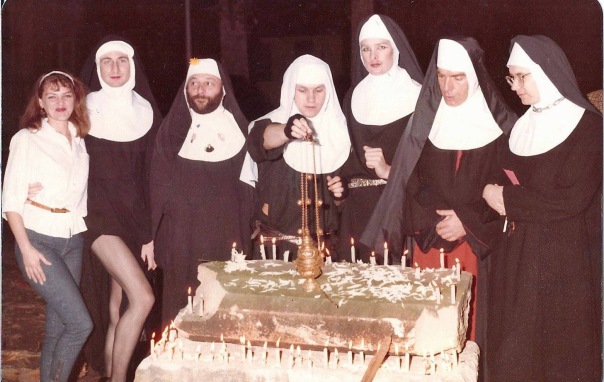 Addendum: There have been comments left with this article, regarding a beat in Boomerang Street, Woolloomooloo (near St Mary’s Cathedral) in the 1970s. It lost popularity due to bashings and robberies. Any stories or memories regarding this beat would be appreciated by the author.