It’s time to recognize these trolling tactics for what they are. 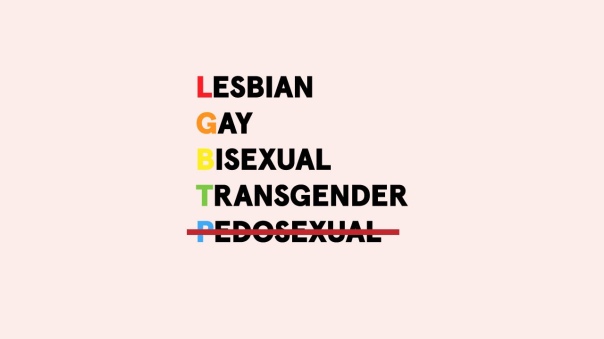 The LGBTQ+ community has long been maliciously associated with pedophiles by people who wish to further stigmatize us. Internet trolls are aware of this violent tradition, and are taking advantage by spreading propaganda that, on first glance, resembles an embrace of pedophiles by LGBTQ+ people. It’s an effective tactic if we accept the false premise: that there is a link between sexual predators and queer people. But there isn’t, and it’s time we stopped meeting that propaganda on the trolls’ terms.

Last month, Central Oregon Pride organizers were targeted by an insidious campaign that distributed fake posters claiming NAMBLA was sponsoring the event along with the Human Dignity Coalition, an LGBTQ+ advocacy group in Bend, Oregon. Jamie Bowman, president of the organization, says, “Several people sent me photos asking if it was the real thing.” The posters prominently featured a photo of 10-year-old Desmond Napoles, known as Desmond is Amazing in drag, who was the subject of debate thanks to professor and YouTuber Jordan Peterson saying on Twitter that Desmond’s drag was child exploitation.

Desmond’s mother, who runs Desmond’s social media, took to Instagram where Desmond has over 75,000 followers to disavow the poster. “THIS IS DISGUSTING!” the caption reads. “I am offended, angry, and yes, hurt. If you see these signs, please tear them down immediately.” Bowman says she did just that, walking around and pulling the posters down.

Since debunked by internet sleuths at Snopes, “clovergender” is an invented identity meant to mock nonbinary people by claiming that some adults have not mentally matured past the age of 13 and therefore should be allowed to date underaged people. Shkreli asked people to spread awareness of “clovergender” on Twitter, and the call for volunteers on 4Chan asked for help to “troll SJW’s.”

Besides the obvious goal of causing distress to queer people, the goal of “clovergender” proponents and of the Oregon Pride trolls is bifold: to get cisgender heterosexual people to associate the LGBTQ+ community with sexual predators, and to get the LGBTQ+ community to mount a genuine defense against the accusation that it is harboring pedophiles within our circles, thus, on some level, validating the assertion. These repudiations, while virtuous in intent, still give the trolls what they want. They want to use the preexisting stigma against LGBTQ+ people to demonize us.

Another recently debunked hoax was the “Minor Attracted Persons” flag that emerged in Pride season this year. “Minor Attracted Persons” is indeed a term some pedophiles have attempted to use to breach mainstream acceptance, but the flag appears to be a hoax that, again, was taken at its word. It fits nicely with other hoaxes that use rainbow flag imagery and inclusive language that support pedophilia.

But perhaps the most malicious campaign came in 2016, when a faction of 4Chan users attempted to create a false movement to include the letter “P,” for pedosexuals, into the LGBTQ+ acronym. Snopes has debunked this as well, but what’s most chilling about this campaign is the planning and patience the organizers exhibited when putting it together. “If they want to demand that society accept their horseshit identities, then it’s time we slip in one of our own,” wrote the post’s author. “How do we do this? We convince them that Pedos deserve rights too. Think about it, if this were to catch any traction at all it would only further remove any legitimization they’ve gained.”

Ethan Edwards, a cofounder of the group “Virtuous Pedophiles” who uses a pseudonym, advocates against acceptance of pedophilia and monitors the movements of groups like NAMBLA online. He says he hasn’t seen any attempts on their end to integrate with the LGBTQ+ community. “Perhaps there is some genuine pedophile somewhere pushing this new rainbow flag. Maybe a few others are trying to infiltrate LGBT+ groups by the backdoor,” he says over email. “But I haven’t seen any evidence of this in a group setting.”

That hasn’t stopped some well-meaning LGBTQ+ people from speaking out against this alleged movement. Attitude, a UK-based gay mag, ran a story on the supposed “MAPS” Pride flag, which, again, is a hoax. It’s completely understandable why one might exercise an abundance of caution by calling this out, but it still validates a false premise that this is part of some larger movement.

It’s also worth noting that oppression of LGBTQ+ people in the modern day relies on the falsehood that queer people are child predators. In Russia, for example, Vladimir Putin said in 2014 that gay people would be safe at the Sochi Winter Olympics so long as they “leave kids alone.” It’s a not-so-subtle reminder that people often invoke the safety of children when trying to legislate against the LGBTQ+ community.

But obvious troll campaigns like these, while they do invoke that reality, must be dealt with on a different level. Our current political climate is an example of what happens when we assume every argument, no matter how ridiculous or odious, has merit and must be met halfway. It’s how we ended up with Donald Trump, whose litany of ridiculous and bombastic statements, like assertions that Mexicans are rapists, earned him even more coverage but little accountability.

We should bear this in mind when responding to incidents like what happened in Oregon, and be aware of the offending party’s goal: to paint a picture in which LGBTQ+ people are having an internal debate over where pedophiles fit into our community. It’s a debate that, at the moment, is not happening on any meaningful scale. Our response should not necessarily be to ignore it. Our response should, however, call a spade a spade and place the blame where it rightfully lies: on the trolls.