I hope this helps… 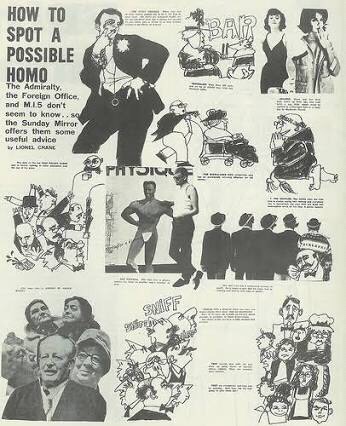 A change of shape

How do you pick out a gay man in a crowd? According to Dr La Forest Potter’s Strange Loves, published in 1933, “the average homosexual” differs from “ordinary men” in 10 easily identifiable ways: he has “large, easily aroused nipples”, “a mincing walk”, “sloped and rounded shoulders”, “thick, luxuriant hair”, “a hairless chest”, “soft, delicate skin” free of manly spots, a lack of “dogmatic energy”, a “peculiar swinging motion of the hips” due to anatomical defects in the spine and pelvis, “a considerable deposit of fat in the region of hips, breasts and thighs”, and – the clinching clue – “feminine buttocks”.

Clearly the author of Strange Loves was a little peculiar himself (how could he know that homosexual nipples were “easily aroused”?), but he is hardly an isolated figure in the troubled history of 20th-century attitudes towards homosexuality. From Raphael Kirchner’s 1908 German handbook, How to Recognise Homosexuals, to the two-page guide on “How to Spot a Possible Homo” published in the Sunday Mirror in 1963 (“shifty glances”, “dropped eyes”, “a fondness for the theatre”), it has long been popular wisdom that “one of them” is easily distinguishable from “one of us”. Whether seen as a choice or a compulsion, in everything from lifestyle to hairstyle, the assumption has been that homosexuality is a secret that simply cannot be kept. It is as if the world had been told that the root of “homosexual”, “homos”, is Greek for “same”, meaning that there are men who fall in love with other men, and had misunderstood it to mean that homosexuals are all the same.

Recently, much of the blame for this sorry state of affairs has been laid at the door of the Victorians. According to the most popular line of argument, although there had always been same-sex activity between men, only during the 19th century did the exclusively homosexual person emerge as a distinct social type. Both as a word and a concept, “homosexuality” was a Victorian invention. From the doctors who attempted to diagnose homosexuality (Ambroise Tardieu claimed in 1857 that the telltale signs in men included a corkscrew-shaped penis and a large bottom: “I have seen one pederast whose buttocks were joined and formed a single, perfect sphere”) to the politicians who attempted to legislate against it, the 19th century gave birth not only to “the homosexual” but to the repressive social forces that continued to echo through the 20th century.

This, at least, is the version of events, much influenced by Michel Foucault’s writings on sexuality, which is dutifully wheeled out by most histories of gay life. But then, Foucault was never one to let the facts get in the way of a good theory and, as Graham Robb’s revisionist account proves, the truth was rather more complicated and a lot more interesting.

Almost every page of this book reverberates with the sound of stereotypes being flattened. For example, the assumption that the Victorians were repressive in their attitudes towards illicit sexual behaviour hardly squares with what was accepted and even celebrated. Consider the case of “Fanny” Park, a drag queen arrested for using the ladies’ room at the Strand Theatre, whose acquittal on sodomy charges in 1870 – secured by his solicitor, the wonderfully named Mr Straight – was loudly cheered; or the tight-trousered rent boys (“mollies”) who were an established tourist attraction in both London and New York; or the odd couples, such as the “married” artists Charles Ricketts and Charles Shannon, whose unconventional households attracted some notoriety and a great deal of indifference.

Indeed, for a love that supposedly dared not speak its name, homosexuality was a surprisingly noisy part of Victorian life, less a subculture than a parallel culture that ran alongside and occasionally ran into the heterosexual mainstream. Even Jane Austen, who was hardly in the vanguard of permissiveness, allowed herself a sly joke about gay sex, when Mary Crawford in Mansfield Park discusses her knowledge of admirals: “Of Rears, and Vices, I saw enough. Now, do not be suspecting me of a pun, I entreat.”

Not that the 19th century was an oasis of tolerance and good sense. Most gay men and women remained strangers to the society that had the power to ostracise them or lock them up. Many also remained strangers to one another. It could be hard to recognise a like-minded soul, and Robb has some moving examples of the tactics needed to sound someone out about their sexuality, simultaneously leading on and backing off, without risking rejection or assault.

Even if this hurdle was overcome, there was no guarantee that two gay people, like any other two people, would have anything to talk about. Oscar Wilde cannot have been alone in finding it hard to reconcile his ideals of a pure Grecian love with the pimply youths he took to bed, like the two Cockney lads Frank Harris recalled seeing him with at the Café Royal, talking about the Olympic Games. “‘Did you sy they was niked?’ ‘Of course,’ Oscar replied, ‘nude, clothed only in sunshine and beauty.'”

Perhaps inevitably, such public displays in the period are rare; the history of Victorian gay life is less one of explicit confessions than it is of flirtatious hints and glimpses. Fleshing out these details into a rich and satisfying narrative, Robb is an ideal guide to the period – unfailingly intelligent, compassionate and discreetly witty.

His earlier biographies of Hugo and Rimbaud showed that he has a sharp eye for the way that real lives tend to resist the neat shapes we impose on them, and Strangers is crammed with statistics and anecdotes that succeed brilliantly in changing what we thought we knew about homosexuality, both then and now. In seeking to explain some of the messy and unpredictable workings of love, Robb has produced a rare thing: not just a book with ideas, but a book with heart.

And this wonderful send-up;

Homosexuals are amongst us. Every day, they discreetly pollute the Good Lord’s Earth with their filthy ways. Luckily, me and Dimitri, at the Domnino League Against Sodomites, have compiled a list of data that will assist you in telling whether your closest friends are secretly queers.

Eating and Drinking:
Whether at the bathhouse, drinking beverages (in appropriate amounts, as prescribed in Timothy 5:23) in the company of fellow Christians, or simply eating lunch on the truck roads of northern Siberia, eating and drinking habits of those within your group of friends will reveal whether or not they are Closetfags™.
Foods consumed by men:

Anything with more than half a pound of meat.
Anything fried or deep fried.

Anything pie-like of the appropriate size.

Anything hunted/skinned yourself and cooked by your wife and/or daughter(s).

Foods consumed by homosexuals:
Anything that comes in small, faggy portions (Sushi, “Cocktail Snacks”)
Anything with a foreign name (Especially if in French)

Anything that is shared with other men (Tapas)

Drinks consumed by men:
Wine (Only if you are depressed. Wine must have a pronouncable name to avoid being mixed with “Faggy wine” [See below] ) Proverbs 31:6-7
Spirits (See Wine)

Anything produced by the Coca-Cola Company, except drinks which reference fruit. These are considered “fruity”, e.g. homosexual beverages.

Cocktails (Notice the name!) – Not a proper drink. Any drink that is a mixture of two or more normally separate drinks is considered a cocktail.
Faggy Wine – Wine made outside of own country, probably in France. The name is distinctly not-English sounding and the label will most likely have pictures of men holding hands.

Conversation:
Homosexuals can often be caught out by listening to their conversation.
Conversation Word Limit
Men talk to exchange information. If any man exceeds the standard limit of 20 words per minute (Unless he is recounting a glorious story of conquest, preaching or praying), he is surely a homosexual.
If you fear you are nearly exceeding this limit in daily conversation, try the following tricks:
* Cut down on words like “Sure.”, “Okay.”, “Nah.” and replace them with indistinct grunts, or glares in the general direction of the person with whom the conversation is occuring.
* Ignore questions, then reproach them for asking you the same thing twice.

Topics of conversation suitable for men;

Most recent [manly sport of your choice] game.

Topics of conversation considered homosexual:
The Weather (In a positive manner):
e.g. “The stars are so beautiful today.”

‘Famous people’ you haven’t heard of.

Anything that uses the word “Gorgeous” or synonyms.

Indepth descriptions of sexual activities with other men.

Anything that is prefaced with “You’ll never guess what I saw in Vogue today!”

Other Signs
* In public toilets, a man uses a urinal next to your own.
* He often walks like a cowboy, but you have never seen him ride a horse.

* When you take a shower, he looks through your bathroom window.

Please add to our list if you find anything that is miss. Dimitri & I work very hard and will update once we discover more about this plague. If you suspect you have homosexuals in your neighbourhood, please seek professional aid and do not go outside alone.
Praise Christ.
Tim Alderman 2015 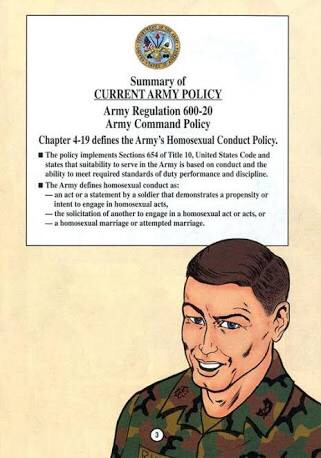