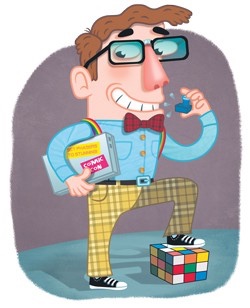 In the video for Jonny McGovern’s song “Sexy Nerd,” guys strip down from cardigan sweaters, bow ties and pocket protectors to tighty-whities and black-rimmed glasses as McGovern sings, “Take your clothes off, but leave your glasses on . . . I need a man to sit on my laptop and open my download.”

The song, released in 2012, hit on a major change in the gay community. “The focus on becoming bigger and masculinity is all gone,” says Chris Ryan, a promoter of bar nights for gay twentysomethings. “Younger guys are really focused on looking smarter, being different from the older generation.”

Hollywood had already caught onto the trend when it cast Toby Maguire as Spider-Man. “Hollywood used to have Spider-Man play Peter Parker, now Peter Parker is playing Spider-Man,” says Matthew Levine, founder of Skin Tight USA, a group for fans of spandex and cosplay. “A lot of muscle queens were nerds who wanted to hide it by becoming gym bunnies. A lot of those muscle queens have let their geek nerd flag fly. Hot sexy geeks have come out of the woodwork.”

It’s entirely appropriate that the first sexy gay nerd superstar was Nate Silver, a short, slightly built, unassuming guy who became famous for spending countless hours poring over reams of data. “Now that everybody has a computer in his pocket, nerds are in, they’re cute, they’re even hot,” says McGovern (whose own fantasy involves hooking up with a guy fixing his iPhone).

Silver’s elevation to sex symbol was part of what Derek Buescher, a professor of cultural studies and media criticism at the University of Puget Sound, calls “a broadening of acceptable norms. The alpha male is more broadly defined as not just physical specimens but can also accomplish things.”

In 2012, Silver himself tweaked the description of him from right-wing website unskewedpolls.com as “a thin and effeminate man with a soft-sounding voice.” Silver tweeted back, “Nate Silver seems kinda gay + ??? = Romney landslide!”

In The Social Network, a small Jewish guy with a borderline personality disorder not only gets to humiliate two arrogant Übermensch brothers, but ends up surrounded by hot tech groupies. If money isn’t the ultimate aphrodisiac, it certainly didn’t hurt the real-life Mark Zuckerberg’s sex appeal after he made $1 billion at age 23.

“Coders are now kings,” says Sean Van Sant, marketing director for Rentboy, a website for male escorts. Van Sant has been considering an ad campaign that plays down macho, muscular types in favor of “nerd-chic guys. Because that’s in style right now they’re featuring it more,” says Van Sant, who fesses up to a personal preference for nerds: “I’ve always had my eye out for those guys.”

Event promoter Daniel Nardicio has always looked for nerdier guys over “the mainstream gay Chelsea Boy types” when hiring go-go boys for his raunch fests in the city and on Fire Island, “adorkable” men, not far past voting age, with classic swimmer’s builds. “That whole bodybuilding mania had gotten so cliché,” Nardicio says. “The manicured Chelsea Boy is gone. Now it’s tattooed and scruffy. The B-List is the new A-List.”

In a 1999 Voice article, “Babes in Boyland,” Guy Trebay put down Fire Island Pines and Chelsea as the epitome of “tittie boy culture.” Trebay described Chelsea as full of men who “resemble a casting call for a Wonderbra ad,” while the Pines was “a small beach town populated exclusively by bendable action figures.”

Today, notes Fire Island fixture Morabito, a DJ with three decades’ experience on the island, “the Pines is a “real mixed bag,” where drinking is the drug of choice and the absence of a six-pack won’t immediately consign visitors to social oblivion.

As for Chelsea, as the eponymous Chelsea Boys aged into muscle daddies and bears, the next generation of gay men established gayborhoods first in Hell’s Kitchen and the East Village, and, more recently, Williamsburg and Bushwick. “Brooklyn,” says McGovern, “is the center of the ‘new attractive,’ the new East Village.”

Inevitably, Nardicio’s long-ago attraction to Williamsburg’s “more offbeat, tattooed, and scruffy” look has fallen prey to companies like Brooklyn Grooming, whose most popular fragrance is called “Williamsburg.” “The nerd is not supposed to be conscious about his appearance,” says Sean Rollins, a men’s fashion blogger who works with Brooklyn Grooming. “We’ve taken that aesthetic and given it groomed flourishes. What started out as not trying is now being replicated.”

While some sexy gay nerds affect a studied sloppiness, others emulate the dandy, whose avatar is designer Thom Browne: ultra-skinny pants sans socks, a sweater vest, and, of course, thick black-rimmed glasses. Browne readily acknowledges Pee-wee Herman, whose trademark is the bow tie, as a major influence and inspiration. When Matt Fox started Fine and Dandy, a website and retail store in Hell’s Kitchen, “people would always call out ‘Pee-wee Herman!’ Today, nobody notices.”

Scenesters and DJ duo AndrewAndrew always dress exactly alike in a style the New York Times called “conservative drag.” “We used to get odd looks, now we get compliments,” AndrewAndrew tells the Voice. (They — or rather, he — have made a lifetime commitment to be considered as one person.) “We still get comments, but now it’s a thumbs-up. A bro or frat guy’s read on it is that we’re peacocking, but really, it’s a rejection of the whole Abercrombie/Juicy Couture culture, and dressing like adults.”

The dandy, notes Natty Adams, straight author of the book I Am Dandy, is “harking back to an earlier style of masculinity. Only after Oscar Wilde did the dandy become associated with gays.” Black culture never rejected natty attire, he adds, but in the years after Stonewall, gay men favored the highly sexualized clone.

“The idea,” Adams says, “is to look dignified and elegant — sexy, but subtly. It’s not an in-your face sexuality,” he adds. “For gay men, dressing is a form of public relations. It says, ‘We’re not just sex-crazed lunatics.’ It goes hand in hand with marriage, the new normal. Today, walking around like a Tom of Finland drawing seems a little silly.”

Along with rejecting the Tom of Finland man’s hypersexuality, sexy gay nerds have embraced their feminine side. A bar hop or stroll through Hell’s Kitchen on any given Saturday night is proof enough of Ryan’s contention that “young guys are more openly femmy.”

Even when cruising online, “they’re not taking themselves as seriously,” Levine adds. Younger guys present themselves “with a wink, irony and a sense of self-detachment.”

The triumph of the sexy nerd is making those who still see a gay community obsessing about “muscularity and masculinity,” as Brandon Ambrosino did in the Atlantic in 2013, look like out-of-it outsiders. If anything, the emphasis on a slimmed-down physique has brought its own set of problems. Studies have shown that the number of gay men with anorexia or bulimia is several times higher than the general male population.

In the past, most of the male clients who came to the Alliance for Eating Disorders complained they weren’t big enough, a condition known as muscle dysmorphia. Now, says clinical director Joann Hendelman, more and more of them are “wanting to be thinner, thinner, and thinner. In the gay community, we see a tremendous amount of that.”

The one notable exception to the “lean is mean” aesthetic is costume play, or cosplay, essentially, dressing up like a superhero. “A decade ago, cosplayers at the comic cons were scarce,” says Chris Riley, a web comic book writer in Los Angeles. “Gays were treated very harshly in comic books, as either a joke or cannon fodder. Cosplay is what brought everybody out of the closet to accept their nerdiness.”

Nearly everyone agrees that the trend toward pumping and juicing in the gay world of the ’80s was a reaction to the AIDS crisis. Before protease inhibitors, when HIV brought with it prolonged and visible wasting, a beefy body served as a walking clean bill of health. “Now,” Nardicio points out, “men don’t worry about broadcasting that.”

The sexy gay nerd, McGovern says, “is a reaction to spending hours in the gym. They’re saying, ‘This is what my body is naturally.’ If you’ve got a naturally thin body, you can do a couple of push-ups and you’re there.”

But while “the bodybuilder physique is not something they aspire to,” concedes Morabito, “I see plenty of twentysomething guys with muscle. Saying the muscle boy is antiquated depends on what part of town you live in.” Every Saturday night, Viva, a gay party at Studio 48, “is filled with young muscle boys, she says. And the semi-monthly Alegria parties are largely populated by massive men

Some believe that we’re hard-wired to find muscular men attractive. “While we now have a proliferation of genres in media consumption, we still have an archetype of masculinity,” Buescher notes. Hollywood, having replaced Sylvester Stallone and Arnold Schwarzenegger with actors like Robert Downey Jr. and Brad Pitt, is once again super-sizing its action heroes.

Jeff Buchman, who teaches brand management at the Fashion Institute of Technology, believes that men’s body types are as subject to the whims of the moment as the clothes they’re wearing. “Over the years,” he says. “just as women’s bodies have changed, so too [will] males’. The human body only has so many forms, so what’s cool and hip at one point is out the next.”

Josh Steers, an aspiring DJ who moonlights as one of Nardicio’s dancing adorkables, enjoys the work and the money. But he doubts if any other promoter in town would hire him. “People want to see what’s unattainable,” he says about the prevailing go-go boy aesthetic.

Even McGovern agrees that dedicated gym rats shouldn’t despair: “The buff, muscular Chelsea Boy will always remain attractive to gay men and women, and the object of envy for straight men. Big muscles never really go out of style.”