Disclaimer: Opinions expressed in this article are based on observation, not personal likes, dislikes or desire.

A person who imitates or copies another.

I hate to diss on my own sex – I reckon they get enough unwarranted stick as it is – but what the fuck is going on with men at the moment! Being male myself, I know what battles have been fought over the last three or four decades to break away from the ingrained social and familial stereotyping that constricted and confined us in regards to behaviour, self-expression, language, grooming, dress,  and emotion. We have, up until more liberating times, been automatons, never being ourselves, nor allowing ourselves to be perceived as weak, or dandified. Now, all that has changed – but have we taken it all too far, and created a deadly trap that will be difficult for many of us to get out of?
In the very early 80s, a trend appeared on the gay scene. Gay men were dressing in uber masculine styles – Levi 501s with white, black or navy Bonds tees; flannelette shirts; leather vests; construction gear; cowboy hats; Bonds navy or white singlets; moustaches and buzz-cut hair. The look became known as the “Clone” look, as all the youngish guys were dressing this way. There was a backlash – largely ignored – from the older gays, who had lived much of their gay life at underground parties, dinner parties, saunas and beats. They were not “out” regarding their sexuality, and found it intimidating that others could be so overt. What they failed to see was that the Clone  movement was driven by LGBT people fighting against the oppression and sublimation of gay culture and lifestyle. They were outrightly saying we are not the portrayed limp-wristed fairies, we are not effete, we don’t all speak with lisps, nor are we all window and hair dressers. We are men; we are sexual beings, and we want to rejoice in it, yet at the same time, we are very much like everyone else. This style of radicalism, this uber masculinity, is happening again at the moment, though sexuality isn’t at the forefront.


The trend – and it is big – is noticeable on several fronts: overly toned, physique obsessed bodies; the proliferation of tattoos and piercings; fashion, and grooming. It is virtually impossible to look at a movie, a television advertisement, a magazine, go to the beach, or to your local gym to see the body obsession. It is now at a very unhealthy level! It is all about weights, and more weights. Slim the waist, pump up the pecs and biceps, work on that 6 or 8 pack stomach, get to the lowest possible body fat percentage – and spend a lot of time checking out other guys…and checking yourself out in every mirror or store eindow that you encounter. Guys are no longer content to just be fit! It is not all that long ago that we decided to tackle the obesity problem that has become a national disgrace. The trend turned towards fitness – losing excess weight, developing a healthy body through exercise and diet, and maintaining an active lifestyle. The message seems to have gotten mangled somewhere along the way. Now, the problem I personally have with slim, heavily muscled guys covered in tatts is that…I like it – at least to look at. But that doesn’t mean I can’t see the bad side of the trend, and acknowledge that there is going to be – if not already – a negative side to it. The obsessive nature of reaching this goal is already having repercussions. In a recent chat with a mate who, by his own admission, had been obsessed with building the “perfect” body – and boy, he did look really hot when he achieved it – showed the dark side of this obsession. He was attending the gym 2-3 times per DAY -which on its own is very dangerous, as the body has no time to rest up, and repair damage. There was the over-use of supplements, including pre-workout, with no regard as to what they may obtain. His personal and family life were affected, with his partner feeling she was powerless to intervene. It was, in his own words, a deadly obsession.
The other real problems associated with the body obsession is that if guys feel that photos don’t show them in the light they want to be seen in – hey…photoshop it! Photoshopped images are very obvious due to their “plastic” look – well, to everyone except those doing the tweaking, anyway! The really concerning aspect though, is the young ages of many men following this trend. You now see 15-18yo guys with bodies that just don’t look right – and at that age, you don’t need heavy workouts, as most are already lean, and just need a small amount of muscle work, as building muscle is easy at that age. Body dysmorphia is becoming an ever increasing problem, along with low self-esteem, setting unrealistic goals, dietary problems due to the cutting out of essential food groups, and setting themselves up for a fall. Sustaining these types of bodies is, for most, improbable in the long term. No one is thinking – what’s going to happen if I get ill, or get into a relationship that doesn’t allow time for heavy workouts, or what if I have kids, or change jobs, or move to areas where regular access to a gym is not possible! Workout from home? Yeah sure – judt look at how much home gym equipment is sitting under beds, is on Ebay, or goes out with the next clean-up! What happens is…all that muscle becomes fat. And what about the guys who go above and beyond with supplements, into the world of testosterone injections, HGH, or steroids! The future health implications are very serious, with heart and renal problems that can – at the very worst – kill you. The price is way too high for just looking like a super-human!
All this has further led onto other strange, uniquely 21st century phenomena. Guys have started removing all body hair (I so want to lick their smooth bodies all over!) by laser, cream depilation (Veet has a depilatory cream out just for men) or body shaving. This often includes either severely cropped genital pubic hair – or its total removal. Personally, I hate body hair, and both shave and depilate regularly. My pet loathing is thick course body hair, especially on the back, shoulders and bum. Many love it…but to each their own. Which leads onto – tattooing. 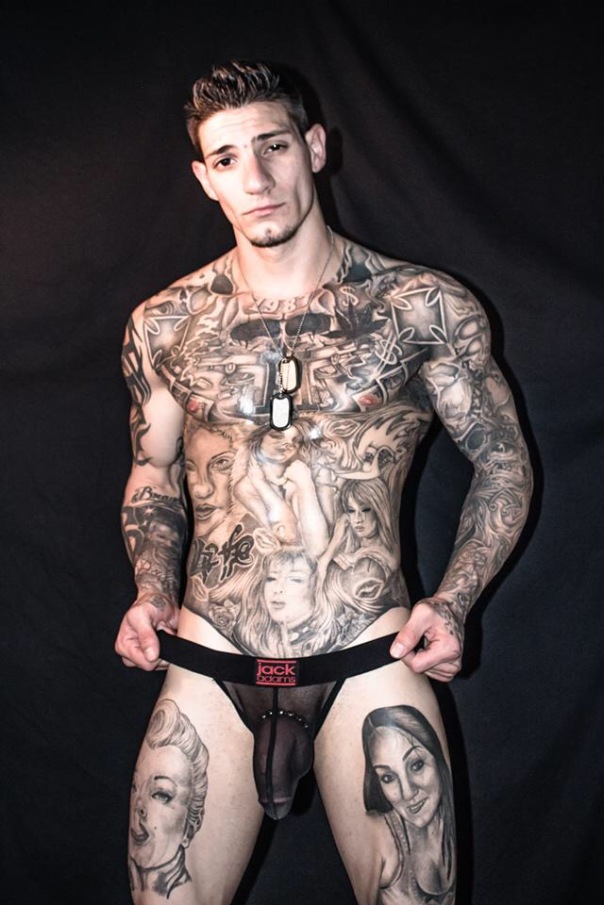 Tattoos used to be looked down on, but now it seems that they have earned a degree of respectability. But not the simple, single tattoo that I have on my arm – these are full-blown torso, and full sleeve, tattoos! Many of which are quite elaborate, and works of art in the true sense of the word. How guys can afford them is beyond me, let alone find the time to have it done. Guys are even getting their cocks tattooed! It is now very much a case of monkey see, monkey do, as the phenomena is widely spread. Add the proliferation of body piercings, and you have a case of individuality going out the window! I lovetattoos, and find them very erotic, but even I question why so many men are going all-out to cover themselves in body art. Straight men have become the new gay Clones!

The problem is, guys, that if we line you all up…you all look the same!

And what is it with things like top-knots (man-buns) and tiny pony tails! Thankfully, the fashion didn’t last long, but while it did they seemed to be everywhere, including on a lot of men they didn’t suit. Then we had everyone growing beards! It is all just strange!


Fashion at the  moment is pretty cool, I have to say. Amazing tee-shirts and shirts, great shoe designs, and I love the lean look of slim cut chinos, jeans and shorts. Men have finally got daring with colour and pattern, and are not afraid to show some bare ankle under a roll-cuffed chino. V-neck tees show off defined bodies, and jackets and hoodies have once again become proper fashion accessories. Handbags (I HATE the term “man-bag”) and satchels have given us an excuse to no longer have bulging pockets. And just as you ladies have under garments that “lift this; squeeze that; push that down”, so to has mens underwear moved into narcissism territory! In some cases, as below, it has truly gone overboard! It’s bad enough that there are “fitness” products promoted as taking the work out of exercise, and exercise from the “comfort of your own home” – welcome to the lazy world of those who want to look good, but without the hard yards – but this padding to look like muscles takes it to an even lower level! Add this to the line up of compression tops to pull the fat in, underwear with padded bums, and a host of underwear designed to make your cock look bigger…and you have to wonder if we are living in a world of delusion, one where your true self is made unavailable to other people! Individuality would appear to be well and truly out of fashion. 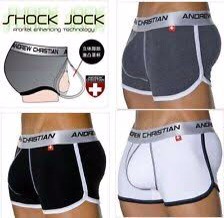 
So guys, it’s time to reclaim your individuality. Start thinking of working out to get toned and fit, not as a competition against every other guy in the gym. The body you build today will need to be maintained for many, many years to come, so don’t make it a chore. And while you are at it, balance your diet. By all means, get body art, but like your bodybuilding…think to the future. You are not going to have taught skin forever, and will it affect your chances of getting the job of your dreams? And try to follow a theme. Avoid names – divirce happens, you know! As for head & facial hair, don’t look at yourself through rose-coloured glasses. Every fashion that comes along doesn’t necessarily suit everyone! As for bodily enhancements via clothing – just don’t! Be proud of your butt, and your cock. I love ordinary sized cocks, and agree with the adage that it’s not how much length you’ve got, but how you use it! Sex is about pleasure, not a challenge 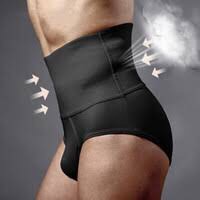