Last month marked the 50th anniversary of the 1967 Sexual Offences Act, a landmark piece of legislation in the United Kingdom that ceased the prosecution of men for homosexual acts. It wasn’t a perfect law by any means — it did not fully decriminalize sexual acts with persons of the same sex — but it was the first legislative step toward equality for LGBTQ people under British law.

Prior to the 1970s, few gay people in Britain were publicly out and even fewer publicly campaigned. Dedicated activists knew that taking to the streets, being visible and not cowed was a key strategy in the pursuit of equal rights. They called for people up and down the country to come out.

These days, gay pride marches are among the largest and most joyful gatherings. So, it might be difficult to imagine the extent to which a public showing of support for LGBTQ rights was radical.

Archive photographs, journals, and organizing literature provide testament to early activism in Britain. Recently, such papers and prints in the Hall-Carpenter Archives at the London School of Economics (LSE) were brought together for Glad to be Gay: The Struggle for Legal Equality, an exhibition of ephemera and social movement materials.

We witness the gatherings, think-ins, political actions, and marches. We see the self-made pamphlets, zines, and newsletters that forged solidarity of thought. These objects galvanized citizens who refused to remain silent; they propelled a movement.

LSE has an important historical role in the push for LGBTQ rights. The first ever Gay Liberation Front (GLF) meeting in the UK was convened in a basement classroom there. The date was October 13, 1970.

Inspired by the GLF movement in the United States, the UK GLF drew up demands and focused on group activities to root those demands — street theatre, “gay days,” festivals, and sit-ins. At first, it was very informal, but soon the GLF realized the power of collective voice. Its activities led to London’s first Gay Pride March in 1972.

The curator of Glad To Be Gay, Gillian Murphy, explains that until the 1950s homosexuality was a taboo subject. Male homosexuality was illegal and lesbianism wasn’t even recognized as an emotional, sexual, or social reality.

In 1957, UK Parliament published the Wolfenden Report, which recommended that the law should no longer judge nor punish sex conducted in private between consenting same-sex adults. The report didn’t come so much from a position of moral enlightenment, but more a realistic appraisal of privacy, its legal protections, and the impossibility of enforcement. Throughout the 1960s, the Homosexual Law Reform Society and campaigners such as Tony Dyson and Antony Grey pressed politicians to decriminalize homosexuality.

Passage of the 1967 Sexual Offences Act was a huge leap forward, but it also had negative consequences. It formalized the legal age of consent at 21 (it was lowered to 18 in 1994, and to 16 until 2001) and as a result, vast numbers of young gay adults, in their love, remained outside the law. Under the Sexual Offences Act, homosexual acts in the military also remained illegal. Furthermore, the law only applied to England and Wales and homosexual sex remained a crime for millions in Scotland and Northern Ireland until the early 80s.

Lifelong gay rights activist Peter Tatchell said in his book Europe in The Pink (1992) that the 1967 Sexual Offences Act actually facilitated an increase in prosecutions against homosexual men. Tatchell told The Guardian recently that between 1967 and the passage of the 2003 Sexual Offences Act, at least 15,000 men were convicted of same-sex acts, which would never have been prosecuted had the partner been of the other sex. 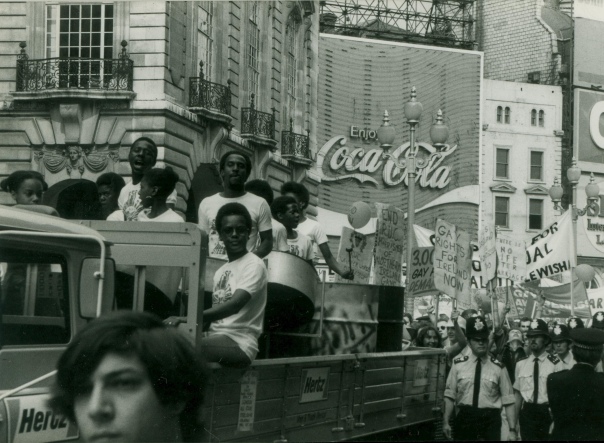 These photographs show the actions behind the LGBTQ community’s call for gay persons to come out. In the second half of the 20th century, gay, lesbian, and queer identified people found strength in numbers. They raised consciousness among the public at large and refused to feel shame any longer. The Gay Liberation Front brought a new energy to gay activism. Newly established grassroots organizations such as the Joint Council for Gay Teenagers, Gay Activists Alliance, and FRIEND (Fellowship for the Relief of the Isolated and Emotionally in Need and Distress) met specific needs of diverse groups within the LGBTQ community.

Looking at these images, reading this history, and tracing the legislative changes (especially the 2003 repeal of the remaining discriminatory laws from 1967), you might be forgiven for thinking the fight has been won. Far from it. The activism of the 1960s and 1970s began a fight which continues today. Transphobia, limited access to medical and mental healthcare, and general homophobic attitudes persist in British society. The fight for equality adopted back then isn’t just a chapter in history; it is also part of a continuum of speaking out, winning freedoms, and promoting love that is ongoing.

Production of Come Together magazine in Aubrey Walter’s flat, circa 1972. (Hall-Carpenter Archives/LSE Library)