Queering the paper trail in the more hostile world before 1970 there were no Australian gay magazines. Thirty years later, almost half a million copies of them were churned out each month with revenues that exceeded eight million dollars a year.

Despite this spectacular growth of a new industry – which continued until print was eclipsed in recent times by the internet – few publishers started newspapers or magazines with the intent to make money, and even fewer actually made any. Publishers came from the community as activist leaders, commercial venue owners or social scene participants who wanted to change their world in some way, great or small.

Various publishers used magazines to talk about what it meant to be homosexual, to challenge the views of the outside world, and to encourage a sense of gay pride. Some pushed ideas that were controversial within the gay community, such as notions of assertive gay male masculinity or lesbian sexual fetish. Some also considered it a core role for their publications to promote and build the gay scene, and foster the identity of its individuals. 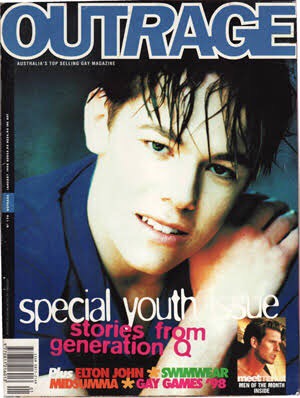 Before the internet, magazines and newspapers were the dominant voice shaping gay and lesbian life in Australia. Through their need to sell advertising, they also played a part in developing the idea of the affluent gay consumer.

Historian Graham Willett describes Australia in the 1950s as a time when homosexuals were persecuted. There was active discrimination of homosexuals by state institutions in terms of employment and other rights and an increase in psychotherapies and criminal convictions, accompanied by the isolating effect of either media silence or vilification. Books and publications with even hints of homosexuality were zealously banned under strict government censorship laws, both federal and state.

But the world was changing. During the 1960s a range of predominantly youth-driven movements appeared: anti-Vietnam, New Left revolutionary radicalism, environmental concerns, the ‘get high, get laid’ counter-culture and second wave feminism, each challenging the dominant values of western society. It was these growing liberal attitudes and the gradual reform of censorship laws that made gay publishing possible.

The first gay media in Australia was activist by nature. Camp Ink was published in 1970 by gay activists from the intellectual left, and 500 copies were printed to be “a voice to the outside world”, as its key instigator John Ware later said. He was a psychology student in Sydney at the time, who clashed with his lecturers over their teachings that homosexuality was deviant behaviour. The first Camp Ink cover image was a black and white illustration that implied aversion therapy was akin to sawing off a man’s penis. The magazine became the official journal for the activist group CAMP and offered a free flow of ideas presenting homosexuality in a positive light, with debates on topics such as promiscuity, male prostitution, religion transvestites, law reform and the role of beats.

Despite the persecution of homosexuals, a gay world did exist before 1970, hidden from the public eye through friendship networks, in public parks and discreet corners of restaurants, coffee shops and bars. Catering to this private social scene, 22-year-old John Baker and his lover William Easton started the magazine William & John in 1972. They originally planned to produce a cheap newsletter to amuse their gay party set friends, but instead teamed up with a publisher to produce a more professional publication that boldly showed male nudity. Baker was not part of the formal activist movement nor the fledgling gay venue scene, and his magazine reflected the sexual libertine values of the time. Despite selling 20,000 copies an issue, William & John struggled to survive due to lingering censorship battles and personal difficulties faced by the publishers. However, a new market had been discovered and other commercially-oriented publishers then moved in to provide titillating content for gay men. 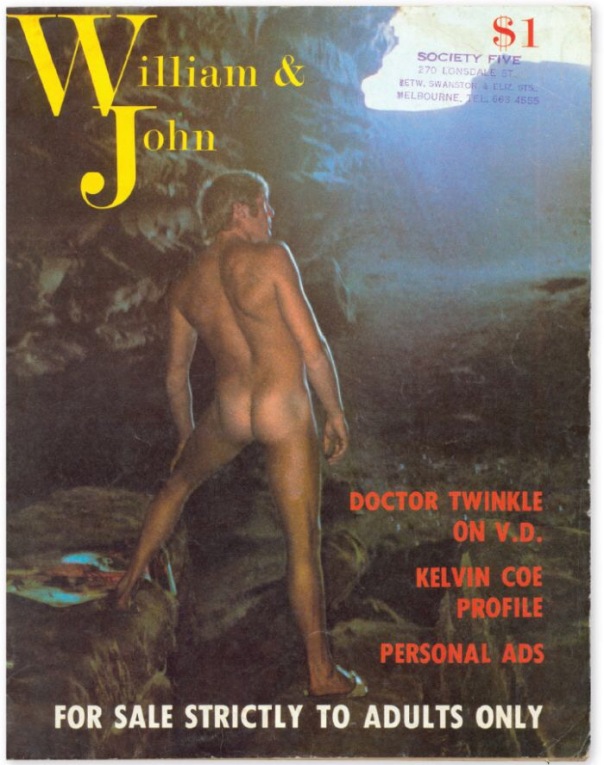 Lesbians, out-numbered and out-shouted by gay men and seen by some in the women’s movement as tarnishing that movement’s reputation, started their own separate publications. Liz Ross was active in the women’s liberation movement but critical of its publications for not providing enough coverage of lesbian issues. She became a key member of a collective that in 1976 produced the first of an unbroken line of lesbian magazines in Melbourne – the baton passed from Lesbian News to Labrys to Lesbiana. Sydney soon followed with its own publications, including Lesbians On The Loose (LOTL), which is still being published today. 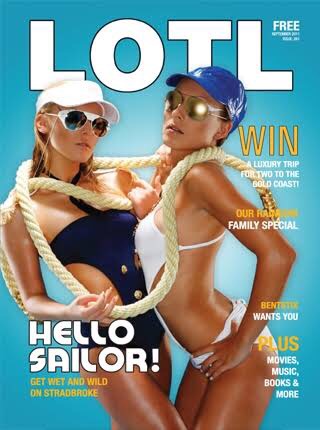 Towards the end of the 1970s the gay world changed. Fueled by the mass migration of predominantly gay men from rural, suburban and interstate areas to the relative safety of the inner-city rapidly expanded the commercial venue scene, particularly in Sydney where the thriving Oxford Street precinct developed. This was accompanied by the growth of gay sporting, social and community service groups. Building and servicing this community suited the needs of media – it presented a reason to push forward gay rights, and on a practical level provided editorial content, advertising revenue and distribution outlets for the magazines.

A flurry of new publications started up. In 1975, Sydney gay bar manager Rod Stringer met with Los Angeles Advocate staffers in the US and launched a similar magazine in Australia called Campaign. He avoided overt sexual imagery, wanting to produce a respectable publication focused on gay men’s entertainment and lifestyle.

Eight years later in Melbourne, OutRage magazine shed its activist beginnings as Gay Community News to embrace a new name and a glossy presentation of entertainment and lifestyle. Its key architect was Danny Vadasz, and this dramatic shift from gay liberationist politics to gay men’s lifestyle mag mirrored his changing perception of the role gay media should play. He now saw the fight for gay social reform as achievable, rather than trying to overcome the entire capitalist/patriarchal system. Despite its shift to the commercial, OutRage stayed true to its activist origins through crucial and sustained coverage of the AIDS epidemic during the mid-1980s 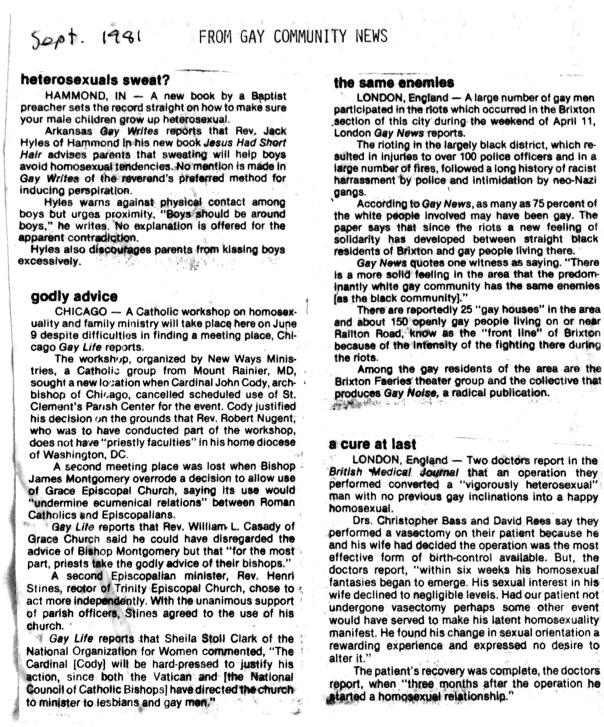 Other gay men’s lifestyle publishers wanted to shake up the fledgling gay community and reshape it. Michael Glynn started the free newspaper Sydney Star in 1979 to promote an assertive masculine style and featured leather-clad men with hairy chests and moustaches. He publicly urged gay men to abandon the “limp-wristed fairy image”.

The 1988 emergence of Wicked Women by Francine Laybutt and her girlfriend Lisa Salmon was a direct challenge to prevailing feminist views in Australia. As a couple, Laybutt and Salmon explored sexual fetish and sadomasochism and the magazine focused on hardcore S&M, triggering boycotts from sections of the lesbian community. Despite this backlash, the magazine ran until 1996.

In the 1990s another key shift occurred in gay publishing with the dramatic expansion of free newspapers. Their growth into the dominant media form was driven by the fact they were free and easily-accessible, and their quick turnaround provided up-to-date news, venue gig guides and personal dating classifieds. High readership numbers attracted advertisers, which inevitably drove the search for even more readers. This led to a broadening of content to appeal to more sections of the community. More news was included, along with lesbian content and coverage of community group activities. Most advertisers were local businesses which encouraged the development of local newspapers in each city, and the market grew in Sydney, Melbourne and Brisbane to sustain competing newspapers.

This expansion was also fueled by the growth in advertising from mainstream businesses, which started to shed their fear of association with a vilified minority and instead saw potential gain from a dynamic niche group. Gay media’s constant appetite for advertising revenue beyond just local gay businesses saw it play a leading role in developing the idea of the affluent gay consumer. The massive expansion of free newspapers set the scene for an audacious takeover in 1999 when many publications were swallowed up by property development company The Satellite Group, which promised to deliver efficiency through its national scope, and to usher in the new age of the web. The venture failed due to poor management and massive debt in its property division, and the company was bankrupt 12 months later with all its publications shut down. The sector recovered, however, as ex-Satellite staffers launched Melbourne Community Voice in Melbourne and G in Sydney, soon replaced by SX. Previous publishers also launched Bnews in Melbourne, Qnews in Brisbane, QWest (later named Shout) in Perth, and Blaze in Adelaide. 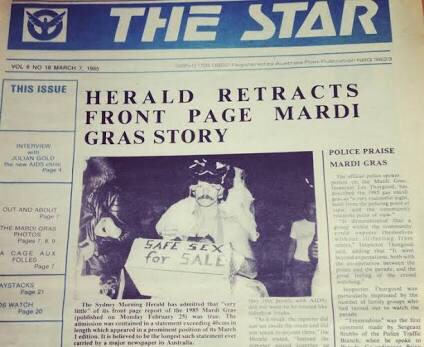 All print media suffered following the rise of the internet though gay publishing was particularly affected. The internet allowed confidential explorations of sexuality, and online cruising saw a decline in venue patronage and a further decline in advertising and readership in the print market. Gay magazines continue to survive in all major cities, though most readers now access the online versions. Hard-copy print runs have been slashed by up to 80 percent.

The golden era for print may have passed but the reasons behind its emergence remain, as well as the crucial role it plays. Societal shifts toward the acceptance of marriage equality bring new debates about relationships and monogamy; as do other debates such as the increased censorship of under-age sexuality. However, individuals making their first tentative steps into exploring their sexuality still need help discovering their identity, companionship and sex. The question remains as to whether the internet is up to the task and until that is proven, a role still exists for diverse print media.