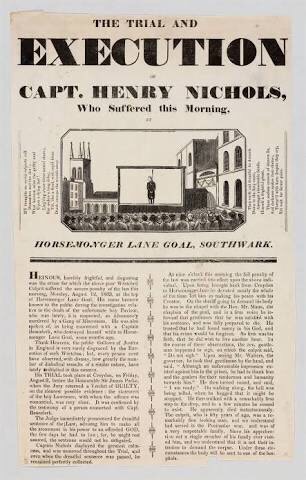 Sodomy — “buggery,” in the more evocative British phrase, often bowdlerized in court records as b-gg–y or the like — was a capital offense in England until 1861, when the penalty was reduced to “merely” life imprisonment.

The London Courier reported the event:

Captain Henry Nicholas Nicholls, who was one of the unnatural gang to which the late Captain Beauclerk belonged, (and which latter gentleman put an end to his existence), was convicted on the clearest evidence at Croydon, on Saturday last, of the capital offence of Sodomy; the prisoner was perfectly calm and unmoved throughout the trial, and even when sentence of death was passed upon him. In performing the duty of passing sentence of death upon the prisoner, Mr. Justice Park told him that it would be inconsistent with that duty if he held out the slightest hope that the law would not be allowed to take its severest course. At 9 o’clock in the morning the sentence was carried into effect. The culprit, who was fifty years of age, was a fine looking man, and had served in the Peninsular war. He was connected with a highly respectable family; but, since his apprehension not a single member of it visited him.

The popular broadside on the case was scarcely more sympathetic. [Here’s another version of the gallow lit]

Even though once or twice a year someone would hang for it and the scandal would send family fleeing his name, Old Blighty still had a vigorous underground gay scene in the 19th century. While Lord Byron was enjoying the easier same-sex access of the Ottoman lands, a friend wrote to him, “that what you get for £5 we must risque our necks for; and are content to risque them.” (Cited here)

Quite accidentally, the senseless destruction this day of a respectable veteran helped set the put-upon gay underground upon its long march towards mainstream acceptance.

A first-person narrative written* in 1833 under the name of Lord Byron (who was in fact nine years dead, but whose queer identity clearly informs the work), Don Leon was a signal piece of literature: the first overt literary defense of homosexuality in English.**

It opens with a scene said to be inspired by Captain Nicholls:

Thou ermined judge, pull off that sable cap!

What! Cans’t thou lie, and take thy morning nap?

Peep thro’ the casement; see the gallows there:

Thy work hangs on it; could not mercy spare?

What had he done? Ask crippled Talleyrand,

Of priest and laymen, who have shared his guilt

(If guilt it be) then slumber if thou wilt;

What bonds had he of social safety broke?

Found’st thou the dagger hid beneath his cloak?

He stopped no lonely traveller on the road;

He burst no lock, he plundered no abode;

He never wrong’d the orphan of his own;

He stifled not the ravish’d maiden’s groan.

His secret haunts were hid from every soul,

Till thou did’st send thy myrmidons to prowl,

And watch the prickings of his morbid lust,

To wring his neck and call thy doings just.

The author — whose identity is still debated† — continues writing more or less autobiographically of Byron’s life, and using his illicit desires and lifestyle (with digressions into historical precedent) to defend homosexuality as ultimately natural and harmless.

The tree we plant will, when its boughs are grown,

Produce no other blossoms than its own;

And thus in man some inborn passions reign

Then, say, was I or nature in the wrong,

If, yet a boy, one inclination, strong

In wayward fancies, domineered my soul,

And bade complete defiance to control?

And harming no one, wherefore call them wrong?

What’s virtue’s touchstone? Unto others do,

As you would wish that others did to you.

Then tell me not of sex, if to one key

The chords, when struck, vibrate in harmony.

No virgin I deflower, nor, lurking, creep,

With steps adult’rous, on a husband’s sleep.

I plough no field in other men’s domain;

And where I delve no seed shall spring again.

Look, how infected with rank disease

Were those, who held St. Peter’s holy keys,

And pious men to whom the people bowed,

And kings, who churches to the saints endowed;

All these were Christians of the highest stamp-

How many scholars, wasting over their lamp,

How many jurists, versed in legal rules,

How many poets, honoured in the schools,

How many captains, famed for deeds of arms,

Have found their solace in a minion’s arms!

Felt the strange impulse, and his hours beguiled

In penning sonnets to a stripling’s praise,

Such as would damn a poet now-a-days.

To this conclusion we must come at last:

Wise men have lived in generations past,

Whose deeds and sayings history records,

To whom the palm of virtue she awards,

Who, tempted, ate of that forbidden tree,

Which prejudice denies to you and me.

Then be consistent; and, at once confess,

If man’s pursuit through life is happiness,

The great, the wise, the pious, and the good,

Have what they sought not rightly understood;

Or deem not else that aberration crime,

Which reigns in every caste and every clime.

To this conclusion we must come at last:

Wise men have lived in generations past,

Whose deeds and sayings history records,

To whom the palm of virtue she awards,

Who, tempted, ate of that forbidden tree,

Which prejudice denies to you and me.

Then be consistent, and, at once confess;

If man’s pursuit through life is happiness,

The great, the wise, the pious, and the good,

Have what they sought not rightly understood;

Or deem not else that aberration crime,

Which reigns in every caste and every clime.

Statesmen, in your exalted station know

Sins of omission for commission go;

Since ships as often founder on the main

From leaks unstopped as from the hurricane.

Shore up your house; it totters to the base;

A mouldering rot corrodes it; and the trace

Of every crime you punish I descry:

The least of all perhaps is sodomy.

I stand a monument, whereby to learn

Where blear-eyed prejudice erects her throne,

And has no scale for virtue but her own.

* Don Leon circulated initially in manuscript form, and was not published in England until years later — a known printing in 1866, and possibly another lost edition from before 1853.

** Here lagging well behind France, which had burned only a bare handful of homosexuals under monarchist anti-sodomy laws in the 18th century, and decriminalized homosexuality full stop in 1791. In Philosophy in the Boudoir the Marquis de Sade preened casually triumphant over the bad old days while Lord Byron was still a boy.

We wonder that savagery could ever reach the point where you condemn to death an unhappy person all of whose crime amounts to not sharing your tastes … Nature, who places such slight importance upon the essence that flows in our loins, can scarcely be vexed by our choice when we are pleased to vent it into this or that avenue.

† Candidates include parliamentarian William Bankes, who was arrested for sodomy in 1833 but acquitted later in the year; fellow MP John Cam Hobhouse; and playwright and Byron-idolizer George Coleman.