Frederick Lindsay was born at Chatswood, New South Wales, on the 10th July 1922 to Frederick George Rickinson Pickhills and Ethel Osmond, both from Bourke. He was the second-eldest child of four siblings, and the only male. His sisters are Dorothy, Dulcie and Eileen. I know little about his younger years other than that he was trained as a motor mechanic and a carpenter, two trades he was proficient in till the day he died. Photographs of the young (and the older) Frederick are few and far between, though what I do have show a man who was perhaps happier pre-war than post-war. There are photographs of him in overalls outside a garage where he worked during the 30’s; in Army uniform, and with his slightly cocked hat shows quite a handsome man; a casual photo in shorts; a small photo with his three sisters as youngsters: on a motor bike with a friend, a personal passion until a serious accident in the late 50’s; a lovely photograph with my mother that looks very 40’s; and a wedding photograph outside the church they were married in. He never, ever spoke about his military service and I have no idea of how his war experiences affected him other than that, apart from taking me to several ANZAC day marches, he never really approved of this wartime celebration and had nothing to do with his war comrades. However, I do have his war record and know that he enlisted at the Martin Place Recruiting Depot in Sydney on the 3rd of November 1941. His army number is NX50073. He had obviously lied about his age (he was 19 at the time of enlistment) as it is listed as 21 and three months which is then struck through and his true age inserted. He is listed as being single and a motor mechanic. A surprising find on the Attestation Form is his next of kin, noted as a Norman Emmanuel, who lived in Hillside Flats in Elizabeth St, Artarmon., and is an uncle. It is odd that he didn’t have a parent with him, and I have absolutely no idea who this supposed relative is. He took his oath of allegiance on the same day. There are small front and side photo’s at the bottom of the form. I also have his Army driving license no. 246312 which shows his rank as CFN (Craftsman), and lists the vehicle types he could drive. I also have his Record of Service Book which tells us he was 5’91/2″, weighed 131 lbs, had a 331/2″ chest, fair complexion, light brown hair, hazel eyes and a small scar right frontal region. He had qualified on the firing range, had done a motor mechanics course, he appears to have been appointed as a mechanic in 1941, and was a tester of motor vehicles in 1943. I’m of the thinking that he was a driving instructor. There is a listing of his leave, including in New Guinea and Borneo up till his discharge. We know he passed a chest x-ray in 1941. As for medals he received the 1939/45 Star, and the Pacific Star. His next of kin is listed here as Ethel Pickhills (mother) at 14 Saywell St, Chatswood. We also have all his Proceedings for Discharge, Determination of Demobilisation Priority, his Service and Casualty Forms and a copy of his Certificate of Discharge No. 401253 which informs us that No. NX50073 Craftsman Frederick Lindsay Pickhills of the 2/53 Aust Light Aid Detachment served on continuous full-time war service in the Australian Imperial Force from 3/11/1941 to 14/2/1946 for a total effective period of 1,565 days which included Active Service in Australia for 819 days and outside Australia for 584 days. He received the War Badge R.A.S. No. A.234189 and that he was discharged from the AIF on 14/2/1946.

I believe that the Australia he returned to was not the Australia he left, and I don’t think he ever came to terms with that. He maintained his 1940’s attitudes throughout the rest of his life which made him a difficult father as he could never reconcile himself to a more contemporary age. No wonder I rebelled. He never claimed his military service medals. I have attempted to claim them over the last couple of years, but due to his Last Will and Testament being made out in my step-mother and step-brothers favour I have not been able to procure them. I will follow this up at a later time. 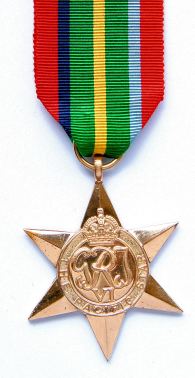