The names Wendy & Wayne, and gender terms him and her are all used in this article. The newspapers used the male terminologies, though only ever knowing Wayne as Wendy I felt more comfortable using the female terminologies. Where people have been quoted, the terminologies they used are included. 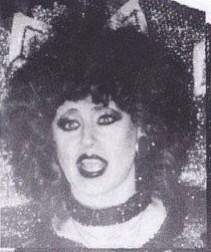 On the evening of April 30, 1985, well known and popular gay drag entertainer, Wendy Wayne (Wayne Kerry Brennan), 35, was murdered in his small Darlinghurst Road, King’s Cross, bedsitter. He had been knocked unconsciius by a blow to the head, then shot twice in the back. It was thought by police that the killer may have been a client.

I did not personally know Wendy, though had seen her perform at Pete’s Beat in Oxford Street, and had actually met her on 25 February that year, when she attended a party at a friends flat (Barry Costello) on the corner of  Oxford & Crown streets in Darlinghurst, then joined us on the awning outside the flat to watch the Mardi Gras parade. She attended the party with Tiny Tina – another performer at Petr’s Beat. Little did we know at that time, that 8 weeks later she would be dead.

Friend’s were distraught and puzzled.  Wayne had geen well loved, and was known to many people, both straight and gay. To everyones knowledge, he had no enemies. He was a popular performer at Pete’s Beat, and also at Les Girls, where he put in occasional guest appearances.

An autopsy indicated that the murder was quite brutal, with him being knocked unconscious by a hard blow to the back of his head. The murderer had then shot him with what appeared to be a .45 ecalibre gun with two shots at close rang in his back. One shot had been placed between the shoulder blades, and exited through the neck. He was shot a second time through the  base of the skull, with the bullet exiting through the chin. He was then covered within a leopard skin. He was discovered by a friend, Kenneth Beckham, the next morning. The door to the bedsit was open’ and the television & heater were both on. Police were unable to find the killer, the gun, or bullets involved in the murder.

Accoding to Kenneth “Wendy was the nicest person you could ever meet”. “She was loved by her workmates, and all her friends”. “No one knew of any ill-feeling between her, or anyone else. She was just too kind”. Kenneth also informed police that Wayne had grown up in Newcastle, and had geen a performer for some years. He stated that there had been no arguments, either professionally, or romantically. He was well known by many in pubs in Darlinghurst, Moore Park, and Surry Hills. 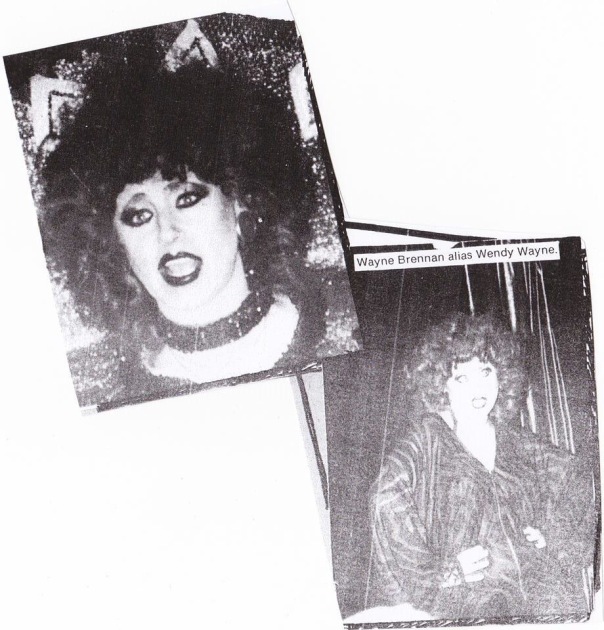 There were fears among both gays and other transvestites that a sex killer could be on the loose. Police claimed that Wayne was kniwn to other King’s Cross prostitutes, and personalities. Kenneth stated ” I just hope police find this killer, in case he strikes again!”.

Gloria Murphy, friend and colleague of Wayne’s, said “I’d love to lay my hands on the bastard who did it. I’m not scared, just angry and daddened by the whole business!”. Gloria had known Wayne for 20 years, and they both performed together in the Hallelujah Hollywood show at Pete’s Beat. “I knew Wendy when she was just a 16-year-old kid who ran away from home” she said. “She performed around all the old traps such as the Pink Pussycat, and the Pink Panther”.

Wendy’s friends cimed that she had only recently become a prostitute, and may have attracted a “bad” client. Talent co-ordinator of Pete’s Beat, Tina, also appeared in the stage show with Wendy and saud “I’m sure it was no one known to our social circle, we’re a pretty tight knit group and don’t associate with weirdo’s”. Graham King, stage manager of Pes Beat, sobbed as he said “As soon as Wendy stepped on stage it was magic. It will never be the same again”. “Wendy was a real performer who joked, sang, danced, and really drew a crowd. She made over 400 costumes for her acts over the last three years”.

Terry Grimley, lighting technician of Pete’s Beat, agreed. “She was excellent. Really tops”. And as Gloria says “The show must go on!”.

A month after her murder, police still had no leads  in finding her killer. On the 13 May, Detective Sgt Smith, of Darlinghurst police, appealed to anyone with information in connection to the murder to contact him.

On Sunday night, 12 May, Kandy Johnson & Simone Troy threw open the doors to the upstairs var and entertainment area in the Oaddington Green Hotel, for a genefit for Wendy. Trixie Lamont and Lirraine Campbell-Craig diverged from their usual Sunday night show to host an evening of fund-raising for Wendy’s family. Both of Wendy’s sisters were present, to receive a total of $2,500 donated by local gay businesses, and attendee’s at the event. The elite of Sydney’s drag community performed on the night, including Kandy, Trixie, Lorraine, the performers from the apet’s Beat show, Beau’s and Les Girls.

The murder of Wendy Wayne has never been solved. Whacky conspiracy theories that she was murdered by a detective, or that Sydney bar owner and personality Dawn O’Donnell was involved have not been taken seriously, and have never been investigated. 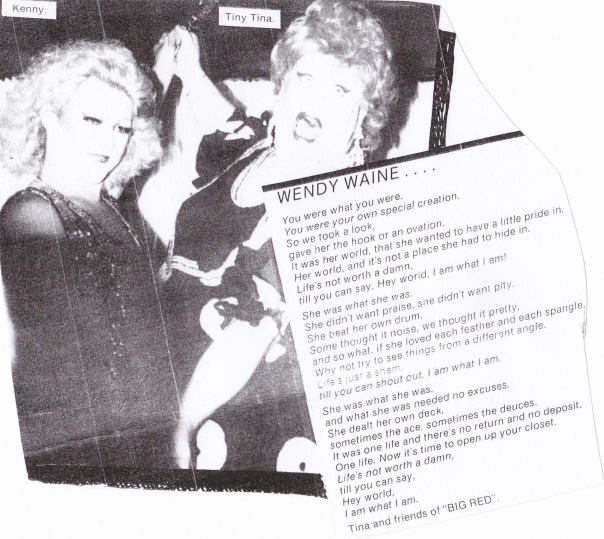