Have you ever wondered what sex during the Black Plague was like? It sounds sick and twisted, but life goes on, as they say, even during an epidemic. People are still people, even when a ton of people are swept away (at least 75 million died during the epidemic). Engaging in physical relationships during the Black Plague (another common name for it) was in many ways a lot like how it was during the rest of the Middle Ages, but the extreme conditions led to some extreme expressions of sexuality.

“Bedroom activity” during the Black Plague was in some ways pretty wild, with some “revelers” deciding to hump the rest of their seemingly short lives away. But doctors at the time also told people to avoid overexerting themselves in the bedroom because they thought the “bad air” would reach them easier if they did. Read on to learn more about what making love during the Black Plague was really like.

There Were “Gatherings” In Graveyards 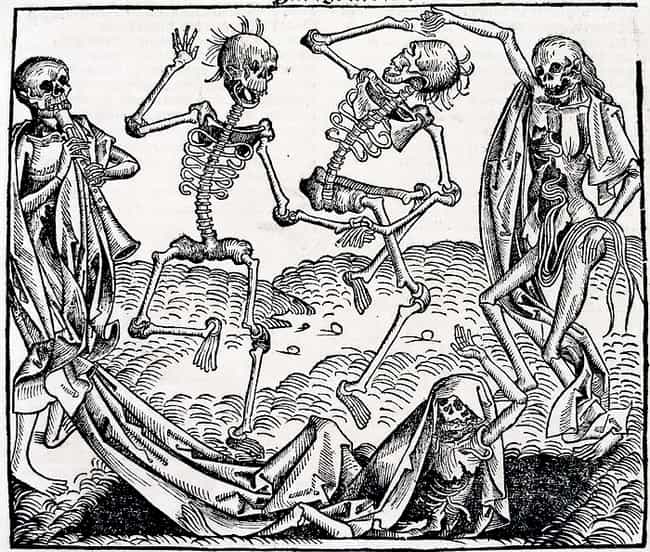 The Black Plague was a stressful time to be alive, for obvious reasons. One way to cope, according to historian David Herlihy in The Black Plague and the Transformation of the West, was by celebrating life in cemeteries. “Group activities” were one of the ways people celebrated life. At Avignon’s Champfleur cemetery, for example, things got so bad that a papal official had to threaten the “fornicators and adulterers” with excommunication for committing “unseemly acts” on the graves.

Street walkers even took advantage of this desire by hanging out at cemeteries. It wasn’t all fornication: revelers also dared to dance, fight, throw dice, and play other games among the graves as well.

Medical logic at the time said that too much “physical activity” “overheated the body,” according to Joseph Patrick Byrne’s The Black Plague, and this allowed “bad air” to enter the body through one’s pores, increasing the chances of catching the plague. Heavy breathing during the act might also lead to inhaling too much of that same “bad air.” A German physician even advised that “all physical exertions and emotions of the mind,” including running, jumping, jealousy, and promiscuity, should be totally avoided or risk catching the dreaded Black Plague. What could people do? They could spend their downtime “relating tales and stories and with good music to delight their hearts.”

“Selling Yourself” Was Institutionalized 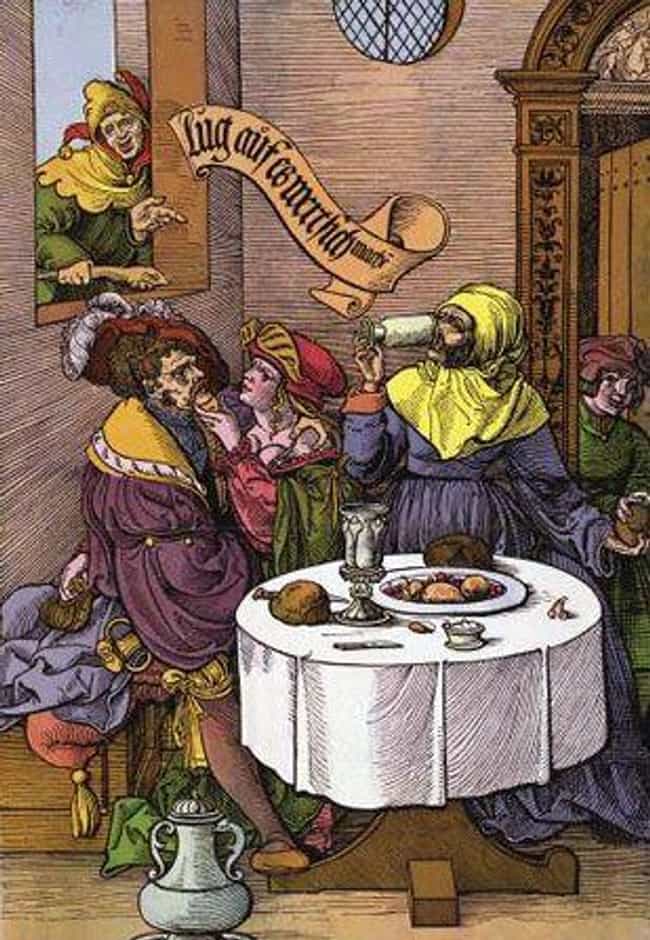 As the casualty toll of the plague increased, working girls benefited more and more, according to Jeffrey Richards. They began to enjoy a “seller’s market” due to a general lack of labor in the era, leading to “a general improvement of their conditions.”

Leah Lydia Otis wrote that as the Black Plague waned, there was a “quantum leap in the institutionalization of [working girls.]” Municipally-owned “parlors” were built, complete with “royal safeguards.” Otis did note, however, that the demand for girls began to wane at that time, as well.

Some Thought Immorality Helped Cause The Plague

Joseph Patrick Byrne wrote that many lawmakers at the time adopted the “Christian belief that sin angered God, who expressed his divine wrath through plague,” and they turned those beliefs into legislation. Many older “moral laws” essentially became just plain laws. This meant sexual immorality was heavily legislated. This “sanitary” legislation targeted sodomy and selling one’s body in particular. In Florence, for example, working girls were “kicked out” of the city in the waning years of the Black Plague. When the industry reemerged in the decades that followed, they were still forbidden to work on the streets. Certain establishments, however, were still allowed to legally operate.

There Was Still An Active Gay Subculture

According to the Encyclopedia of Homosexuality, Volume 2, a “vital urban subculture” of homosexuals existed during the Black Plague. It wasn’t until the Renaissance that “more detailed records of the life and attitudes of homosexual men and women” emerged, but this vital subculture was alive, despite “only fleeting glimpses of it in the literature” of the period.

A few decades before the Black Plague, King Edward II of England was murdered, and centuries-old rumors say he was executed for homosexual activity. (Mel Gibson’s Braveheart received a lot of criticism for its negative portrayal of Edward.) The belief that “sexual immorality” such as “sodomy” helped cause the Black Plague surely was another factor in keeping the subculture hidden during the period.

So-called “flagellants” during the Black Plague were, according to Professor Mark Damen of Utah State University, “professional self-torturers” who went around whipping themselves for a fee in order to “bring God’s favor upon a community hoping to avert the bubonic plague.” They were literal whipping boys that people employed to buy “remission from sin.” The Church, of course, outlawed this behavior, but that didn’t have do much to stop the practice. There was also another group of lesser-known “pseudo-flagellants” that went from town-to-town performing “physical acts” in public for a fee. The Church outlawed them, as well. 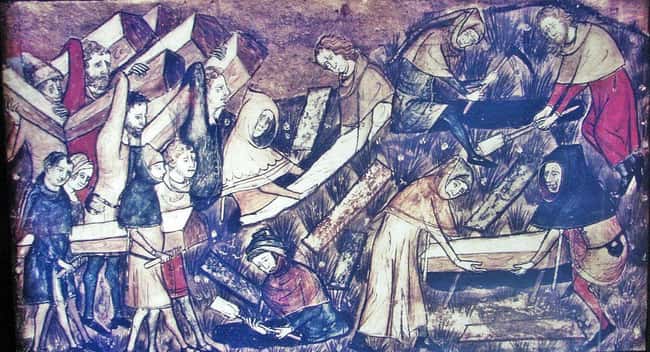 In Domestic Violence in Medieval Texts, Eve Salisbury, Georgiana Donavin, and Merrall Llewelyn Price wrote that incest in England actually increased during the Black Plague. Why? Simple arithmetic. The plague “destroyed between one-third and one-half” of the population, making exogamy (marrying only outside their clan or community) “improbable.” The problem, Donavin wrote, wasn’t keeping cousins from marrying, but instead “finding living cousins with whom one might preserve the patrimony.” A lot of noble families died off during the plague years, meaning “intrafamilial marriages greatly increased.” 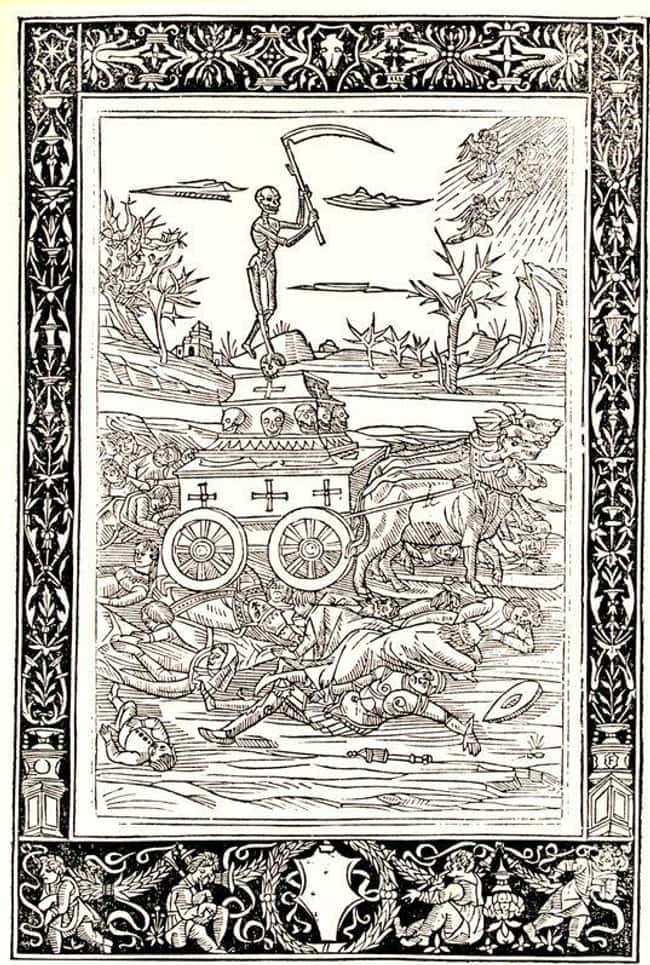 Richard M. Smith wrote in Land, Kinship and Life-Cycle that the severity of fines for fornication in England increased as the severity of other legal fines generally decreased in the middle of the Black Plague period (1349). Smith interpreted the high fines during this period as a punishment for acts that were seen as morally improper. The courts, essentially, decided to ramp up the punishment for immorality in response to the Black Plague. Blame the fornicators, basically. Smith did note, however, that attitudes about unseemly acts such as fornication, and thus the inclination to increase the fines for such acts, may have been changing even before the plague struck.

Responsible for eliminating anywhere between 30 to 60% of Europe’s population between 1346 and 1353, the bubonic plague was a cause of terror. Gruesome symptoms led to mass panic and widespread fear. What happened to people with the black plague? From oozing boils to decaying skin, gross symptoms of the black plague were a common sight in Europe during the 1300s.

The disease occasionally crops up again today. While not always fatal, bubonic plague symptoms can have lasting consequences for sufferers. Early black plague signs include odd lumps and bumps, but also very common ailments. Many plague sufferers initially experience normal symptoms of a cold or flu, like a fever and chills, only to have their health start deteriorating rapidly. Learning about the black plague will leave you second-guessing waiting to see a doctor the next time you come down with a seemingly mild sickness.

Gangrene Is An Unpleasant Side Effect

Sufferers often end up with gangrene as a result of the virus, which is sometimes treated via drastic measures like amputation. Gangrene causes the skin to turn shades of blue, purple, green, red, or black. Swelling and blisters may also occur, and these emit a foul-smelling pus. Skin may also become cold and tender.

One reason amputation is often necessary is that gangrene can lead to septic shock, an often fatal complication.

After their initial appearance, the egg-sized lumps found on plague sufferers get worse. The bumps and boils spread throughout the body. Over time, they begin to rupture and emit blood and pus.

One Complication Will Promptly Shut Down Bodily Functions

Disseminated intravascular coagulation is a medical condition sometimes caused by the plague. This is a serious and potentially fatal complication in which blood clots throughout the body and – as a result – internals organs begin to shut down. This was a death sentence in the early days of the plague, and is often still fatal today.

However, the condition is sometimes successfully treated via a medically induced coma.

Bumps The Size Of An Egg Present As The First Symptom

If you’ve contracted the plague, the first symptom is a little hard to miss. You develop what are called “buboes,” which generally develop a week after you’re exposed to the virus. These are large bumps, about the size of a chicken egg, that are found around the groin, armpit, or neck. In addition to being massive, they’re sensitive.

The bumps are also warm to the touch and tender.

When you’re suffering intensely for unknown reasons, it’s not uncommon to look to the skies for an answer. In the 1300s, some sufferers concluded the Black Death was a punishment brought on by an angry God for the impurities in their own souls. Their solution? Intense acts of self flagellation.

Sufferers, especially those in the upper class, would march from town to town. In front of a public audience, they would beat one another and themselves with heavy straps of leather covered in shards of metal. This ritual was repeated three times a day for a 33-and-a-half-day period.

As more and more people began participating, the pope caught wind. Concerned the self flagellants could usurp his power, he condemned the practice. It fizzled out shortly thereafter.

Plague bacteria spreads rapidly throughout the body, shutting down nearly every vital function. While complications like gangrene and dehydration often led to the end for sufferers, many people were more or less poisoned.

This is due to yersinia pestis, a mutant bacteria that causes the plague. This bacteria is particularly violent as it is unable to survive outside a host, and it can penetrate and hide in a host’s cells. In order to survive, the bacteria multiplies quickly and disables a sufferer’s immune system. Yersinia pestis bacteria then clot underneath the skin, in hopes of being picked up by a passing flea.

Even Survivors Have Lasting Side Effects From The Vomiting

Vomiting is par for the course for a wide variety of common illnesses, but this is no minor ailment when it’s related to the black plague. Depending on the duration of the infection, the consequences of months of acid reflux and vomiting can last for years.

Take the case of Katie Simon, a woman who caught the plague on a backpacking trip she took shortly after college in the early 2000s. Her stomach was afflicted that she had to stick to a strict diet comprised of mostly bland foods free of gluten, dairy, alcohol, caffeine, and processed sweeteners. Her upper digestive system was completely inflamed, and she had ulcers covering her stomach and esophagus. Recovery took two and a half years.

In the disease’s later stages, bleeding is common. Septicemic plague occurs when plague bacteria begin multiplying in a sufferer’s body. They may bleed from the nose, mouth, rectum, or even under the skin.

After an initial infection, bacteria begins to multiply in a sufferer’s bloodstream. This can cause a number of side effects associated with more common illnesses, such as fever, chills, and diarrhea. However, one symptom distinct to the black plague is a change in body color.

Sufferers often experienced the blackening of their fingers, toes, and nose.

Blackening of the extremities is a common side effect, but some sufferers experience complete changes in skin color.

Take the case of Paul Gaylord, an Oregon man who contracted the plague from his cat in 2012. After the initial fever, his skin began to turn grey throughout his body. This caused his wife to rush him to the hospital, where he luckily received life-saving treatment.

The Initial Symptoms Mimic Those Of Normal Colds And Flus

One of the scariest things about the black plague is that initial symptoms aren’t really that different from the run-of-the-mill flu or cold. You may experience fever, shaking, general weakness, and increased sweating.

Next time you experience these symptoms, especially if you’ve been near rats or fleas recently, you might want to see a doctor just in case.