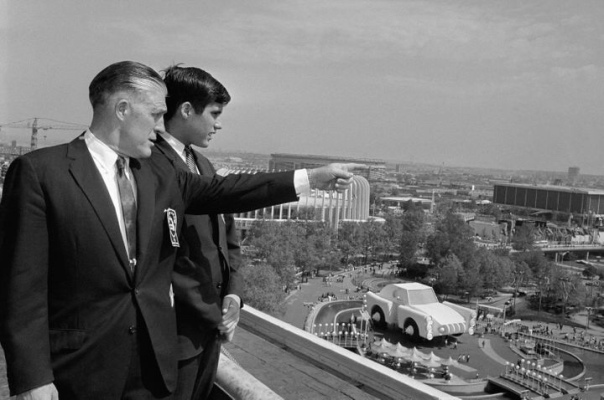 Whether or not what Mitt Romney did as a teenager matters now, the way some conservatives are defending him, you’d think homosexuals didn’t exist until Halston, Calvin Klein, and Liza were discovered dancing at Studio 54 circa 1978.

“For those to the premises more recently arrived, a quick primer on 1965, when this occurred,” wrote syndicated columnist Kathleen Parker, responding to critics who’ve described Romney’s forcible cutting of the dyed-blond hair of a nonconforming student as anti-gay bullying. “Nobody knew who was or wasn’t ‘gay,’ a word that wasn’t yet in popular circulation as a noun and generally meant ‘merry.’ Homosexuality wasn’t on most high-school kids’ radar, period. If anything, Romney may not have liked Lauber’s ‘hippie’ locks, which is the more likely case given the era.”

Really? Check out the synopsis for the 1956 film by a much earlier Minnelli, Liza’s dad Vincente. Tea and Sympathy was adapted from the popular 1953 Broadway play of the same name, and Romney and his prep school buddies might as well have been acting out the plot: “Tom Robinson Lee, a 17-year old student at a boy’s prep school, is at odds with the other boys who like sports, talking about girls, and listening to pop music. Tom prefers classical music, reads books, can sew, goes to the theater, and generally seems to be more at ease in the company of women. The other boys torment him for his ‘unmanly’ qualities and call him ‘sister boy.’”

I don’t know what kind of sheltered life Kathleen Parker led, but homosexuality has been on high-school kids’ radars — particularly the radars of high-school boys — for as long as masculinity has been on their radars, which in Western culture would take us back to the ancient Greeks and the Roman gladiators, I imagine. But even if we don’t want to go back that far, suffice it to say that queer boys were defined in American culture surely since Oscar Wilde was carted off to prison for being a “sodomite” in 1895.

While there were times in the early part of the 20th century when homosexuality was more accepted in some cities (as historian George Chuancey describes in Gay New York, in which he also shows that the word “gay” most certainly existed then), the 1950s saw a homosexual panic that gripped American politics, media, and culture. In 1950 Sen. Joseph McCarthy began his investigations that led to the purging of alleged Communists and homosexuals from the government. In 1951 a popular book called Washington Confidential, co-written by New York Mirror columnist Lee Mortimer, captured the tenor of the time in a chapter titled, “A Garden of Pansies”:

If you’re wondering where your wandering semi-boy is tonight, he’s probably in Washington. The good people shook their heads in disbelief at the revelation that over 90 twisted twerps in trousers had been swished out of the state department. Fly commentators seized on it for gags about fags, whimsy with overtones of Kinsey and the odor of lavender. We pursued the subject and found that there are at least 6000 homosexuals on the government payroll, most of them known, and these comprise only a fraction of the total of their kind in the city.

Tea and Sympathy premiered on Broadway and was made into a film in the midst of that panic. (And you can read all about the context in this paper by film historian David Gerstner, who also happens to be my partner). The McCarthy era and the targeting of homosexuals spurred the first gay and lesbian activists, like the recently deceased pioneer Frank Kameny, who was ejected from the Army Map Service for being gay in 1957.

That first brave but tepid organizing only escalated the panic, which continued well into the 1960s. In 1963, two years before Romney’s prep school “prank,” the anti-gay metro editor of The New York Times, Abe Rosenthal, became alarmed after returning from overseas and seeing so many gay men on the streets of Manhattan. In response he commissioned a piece that was put on the front page of the paper of record, which blared with this headline: “Growth of Overt Homosexuality in City Provokes Wide Concern.”

Those years, the mid-‘60s, were in fact a critical time for the gay-rights movement: It was going to either burst forth, as it eventually did in 1969, with the Stonewall riots, or be suppressed further by the kind of attitudes that empowered high-school boys of the time to hold down a kid perceived as gay and forcibly cut his hair.

It matters today what Mitt Romney did then, even as a high-school student, because the country has moved on from that time of panic into a different place. It would tell us a lot about him, and the kind of leader he would be, if, rather than denying it or suppressing it, he were able to explain how he moved on and, as others have said, if he were able to use his story to shed some light on the anti-gay bullying we still see today.