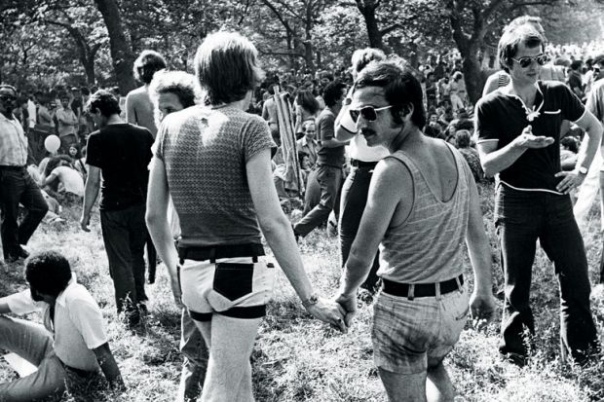 It would have been unthinkable 25 years ago for thousands of openly gay fans to cheer openly gay athletes at Yankee Stadium, for openly gay artists to perform to the acclaim of openly gay audiences at Carnegie Hall, or for the mainstream media to provide extensive and sympathetic coverage of it all. Today’s march and the Gay Games and Cultural Festival are testimony to the legacy of the Stonewall rebellion of June 28, 1969 — when a police assault on a Greenwich Village gay bar turned a small civil rights campaign into a mass liberation movement.

But the enshrinement of Stonewall as the genesis of gay culture threatens to deny the richness and resiliency of gay and lesbian life before the late 60’s and to obscure the long history of gay resistance that made the gay-rights movement possible.

Pre-Stonewall lesbians and gay men are often held up as passive victims of social hatred who lived solitary lives (in the “closet”) that kept them vulnerable to anti-gay ideology. Many gay people blame previous generations for not having had the courage to come out of the closet. Or they condescendingly imagine that their predecessors internalized society’s hatred of homosexuality and became self-loathing.

But the systematic suppression of the gay community was not due to some age-old, unchanging social antipathy, nor was it a sign of passivity and acquiescence by gay people. Anti-gay forces created the closet in response to the openness and assertiveness of gay men and lesbians in the early 20th century.

Beginning in the 1890’s, an extensive gay world took shape in the streets, cafeterias, saloons and apartments of New York City, and gay people played an integral role in the social life of many neighborhoods. Openly gay men drank with sailors and other working men at waterfront dives and entertained them at Bowery saloons; well-known gay people casually mixed with other patrons at Harlem’s basement cabarets; lesbians ran speakeasies where Greenwich Village bohemians — straight and gay — gathered to read their verse.

These men and women, who saw themselves as part of a visible, largely working-class gay world, forged a culture with its own language, customs, folk histories, heroes and heroines. In the 1920’s and early 30’s, gay impresarios organized drag balls attracting thousands of gay dancers and straight spectators. Gay writers, actors and musicians produced a distinctive gay literature and performance style. This cultural outpouring was so popular by the late 20’s that gay performers moved from the margins of the city and briefly became the darlings of Broadway.

This flourishing gay world has been forgotten. It was wiped into historical oblivion by a fierce backlash in the 30’s — part of a wider Depression-era condemnation of the cultural experimentation of the 20’s, which many blamed for the economic collapse. With millions of male breadwinners losing their jobs, people were fearful of any additional threats to traditional family hierarchies.

In New York, laws were enacted prohibiting homosexuals from gathering in any state-licensed public place. Bars, restaurants and cabarets were threatened with loss of their liquor licenses if they employed homosexuals, allowed them to gather on the premises or served them drinks — and the State Liquor Authority closed hundreds of establishments for tolerating a gay presence. This continued for decades: nearly every gay bar in the city was closed in the winter of 1959-60 in response to an anti-gay campaign by the newspaper columnist Lee Mortimer, and again in 1964 in a pre-World’s Fair “cleanup.”

The public discussion of gay issues was also censored. In the early 30’s, after a generation of films had dealt with gay images, the new Hollywood production code prohibited gay characters and even talk of homosexuality in films. In the theater, the backlash had started even before the Depression: after the appearance of a lesbian drama on Broadway and Mae West’s threat to stage a farce about transvestites called “The Drag” in 1927, a state law was passed prohibiting the representation or discussion of homosexuality on the stage.

In the 30’s, the New York City police, using a 1923 state law that made it a criminal act for one man to invite another to have sex, began sending good-looking plainclothes officers into gay bars to strike up conversations with men, lead them on and arrest them if the victims suggested going home. (Between 1923 and 1967, when gay activists persuaded Mayor John V. Lindsay to end most entrapment, more than 50,000 men had been arrested on this charge.)

Anti-gay policing around the country intensified in the 40’s and especially the 50’s, when Senator Joseph McCarthy claimed that homosexuals in the State Department threatened national security. Thousands of gay Federal employees were dismissed. Equally without substance, police departments and newspapers around the country began to demonize homosexuals as child molesters; arrest rates increased dramatically.

The degree to which gay men had to fear arrest — and the subsequent exposure of their homosexuality to their families and employers — is almost impossible to understand today. Although New York’s gay world grew in the post-war years, gay life became less visible and gay meeting places more segregated and carefully hidden from the straight public. The state built the closet in the 30’s, and the isolation of homosexuals made it easier for them to be demonized.

Still, some gay people fought for their rights. In the 1930’s, gay bars challenged the prohibitions against them in the courts (unsuccessfully), and in the 1950’s a handful of courageous souls organized political groups, such as the Mattachine Society and the Daughters of Bilitis, to advocate the homosexual cause. Although most did not speak out so openly, taking this as evidence that they accepted the laws against them misinterprets silence as acquiescence. It construes resistance in the narrowest of terms — as only the organization of formal political groups or protests.

Threatened with police raids, harassment and the loss of their jobs, families and reputations, most people hid their participation in gay life from their straight associates. But this did not necessarily keep them hidden from one other. They developed a sophisticated system of subcultural codes of dress, speech and style that enabled them to recognize one another and to carry on covert conversations. “Gay” itself was such a word until the 60’s, when its homosexual connotations began to be known to nongay New Yorkers.

The tactics gay people devised for communicating, claiming space and affirming their self-worth did not directly challenge anti-gay repression in the way the post-Stonewall movement would, but they allowed many gay people to form a supportive community despite the larger society’s injunction against their doing so. This enabled many lesbians and gay men to build happy, self-confident, loving lives.

That the openness of gay life in the early 20th century was brought to an end after a few decades, and that the memory of it was systematically suppressed, reminds us that the growth of tolerance in recent years cannot be taken for granted. Then as now, increased gay visibility produced a powerful reaction.

But the relative tolerance of homosexuality in the early 20th century also shows that America has not been monolithically and inevitably homophobic, and that social conventions of sexuality are no more natural or timeless than those of race or gender. Attacks on gay men and lesbians have often resulted from broader anxieties in American culture as much as from fears about homosexuality itself. Above all, the last century shows us that attitudes toward gay people can change — and can be changed.