One of the challenges of uncovering transgender histories is that even where we find stories which hint at trans identities, we can’t go back and ask the individuals in question how they would describe themselves.
Even if we could, concepts of gender identity constantly shift and change throughout history, and the question would probably make very little sense to someone who lived centuries before us.

However, the hints we find show us that in the past, just like today, gender was not a simple binary.

In 18th century London a ‘molly house‘ was a coffeehouse, inn, or tavern at which men could meet in secret to socialise and have sex. ‘Molly’ or ‘moll’ was a slang term for a gay man, and for a lower class woman, or a woman selling sex.

Although at this time in England sex between men was punishable by death, molly houses were part of a thriving gay subculture:

The legal records document investigations into about 30 molly houses during the course of the century. Considering that the population of London was only about 600,000 in the 1720s, having even just a dozen molly houses at that time is a bit like having 200 gay clubs in the 1970s. In some respects, the eighteenth-century molly subculture was as extensive as any modern gay subculture.

One of the main molly districts was on the east of the City, around Moorfields in Shoreditch. What is now the south side of Finsbury Square was a cruising area known as ‘Sodomites’ Walk’.

Molly houses are a site where gay histories and trans histories intermingle. It was common for men at the molly house to wear women’s clothes and to speak and act in typically ‘feminine’ ways. Most had alternative names such as Plump Nelly, Primrose Mary, Aunt May, Susan Guzzle, Aunt England, and the Duchess of Camomile.

One very famous molly called Princess Seraphina wore her feminine identity beyond these secret meeting places and into her public life. In 1732 she brought a case against a man for stealing her clothes. Her neighbour Mary Poplet described her in her testimony:
“I have known her Highness a pretty while… I have seen her several times in Women’s Cloaths, she commonly us’d to wear a white Gown, and a scarlet Cloak, with her Hair frizzled and curl’d all round her Forehead; and then she would so flutter her Fan, and make such fine Curt’sies, that you would not have known her from a Woman: She takes great Delight in Balls and Masquerades, and always chuses to appear at them in a Female Dress, that she may have the Satisfation of dancing with fine Gentlemen. Her Highness lives with Mr. Tull in Eagle-Court in the Strand, and calls him her Master, because she was Nurse to him and his Wife when they were both in a Salivation (salivation was a mercurial cure for syphilis); but the Princess is rather Mr. Tull’s Friend, than his domestick Servant. I never heard that she had any other Name than the Princess Seraphina.”.

Much of what we know about mollies comes from court proceedings following raids on molly houses, the most well known of which was the raid on Mother Clap’s molly house in 1726, in Holborn. (Incidentally, Mother Clap was a real woman called Margaret Clap.) After the raid several people were tried and three men were hanged at Tyburn for the crime of ‘sodomy’.

One of the best documented examples from east London is a raid on a molly house in Whitechapel.
“Nine male ladies” arrested
The molly house was owned by Miss Muff – also known as Jonathan Muff – and it stood in Black Lion Yard. The yard no longer exists, but Black Lion House now stands on the site at 45 Whitechapel Road.

On 5 October 1728 The Weekly Journal; or, British Gazetteer includes a news item about the raid:

“On Sunday Night last a Constable with proper Assistants, searched the House of Jonathan Muff, alias Miss Muff, in Black-Lyon Yard, near Whitechapel Church, where they apprehended nine male Ladies, including the Man of the House. They were secured that Night in New Prison, and Monday Morning they were examined before Justice Jackson, in Ayliff-streeet; John Bleak Cawlend was committed to Newgate, he being charged on Oath with committing the detestable Sin of Sodomy.”

Of the nine arrested we know that two were whipped, one was fined, two were acquitted, and one – whose name was given as Thomas Mitchell – attempted to end his life in prison:
he attempted, and had near accomplish’d, destroying himself, in cutting the great Artery of his Left Arm almost asunder; but by the immediate Help of some eminent Surgeons he was preserv’d, tho’ at the Point of Death thro’ the great Effusion of Blood.

John Bleak Cowland, was indicted for that destableSin of Sodomy, and the Break of the Statute against the said Sin made and provided.
Jonathan Parrey depos’d, That in February last, he first came acquainted with the Prisoner at one Muff’s, in Black-Lion-Yard, White-Chappel. That in May last, the Prisoner went Home with him to his Lodgings, and when they were in Bed, he perswaded him to commit the Sin of Sodomy with him, to which he consented, and that they did then, and there, actually commit the Sin of Sodomy, &c. and afterwards in June last, he did actually commit the said Sin of Sodomy twice more with the Prisoner in the Bar.
This Deponent farther said, That he being weary of this wicked and detestable Practice, took a Resolution to betray the Company which met together, to commit such filthy Actions, and accordingly he gave Information against them, and contrived to be in the Room when the Prisoner and others were apprehended, at the aforesaid Muff’s House, in Black-Lion-Yard, White-Chappel.
The Prisoner said in his Defence, That he only went to Muff’s House, to learn to play on the Violin, and that it was all false which Parrey had swore against him.
The Prisoner’s Brother depos’d, That he knew Parrey to be an idle vagabond Fellow, that would swear a Cow is Horse, and his Oath was therefore not to be taken, but the Jury believing the contrary, found him Guilty. DEATH.

Richard Challenor of St. Mary’s White-Chappel, was indicted for assaulting John Branch Harris, with an Intent to commit that wicked and destestable Sin of Sodomy, with the said John Granch Harris.
He was a second Time indicted for assaulting Jonathan Parrey, with an Intent to commit the said Sin of Sodomy, with him the said Jonathan Parrey.
Jonathan Parrey depos’d, That in February last he first came acquainted with the Prisoner, that they about that Time lay together and equally committed filthy undecent and effeminate Actions; that they likewise did the same at Muff’s Hosue in Black-Lion-Yard White-Chappel, and that the Lodging in an alley near White-Chappel Church, in July last, Richard Challoner and John Branch Harris came to see him, and put their Hands into each other’s Breeches, after which they went out of the House into an Arbour in the Garden, but what they did there he could not tell.
The Jury acquitted him of both Indictments.

Isaac Milton of St. Mary’s White-Chappel, was indicted for assaulting Jonathan Parrey, with an Intent to commit that destable Sin of Sodomy, with the said Jonathan Parrey.
Jonathan Parren depos’d, That in June last, he first became acquainted with the Prisoner, at Muff’s House in White-Chappel. That at the Three-Nuns in White-Chappel, they lay together, when the Prisoner would have had him committed Sodomy with him, but he refused it; that then the Prisoner ofered to act the same Crime of Sodomy with him, but he would not suffer him.
What strengthen’d this Evidence, was the Oath of Mr. Willis, who depos’d, That when Parrey gave Information agianst Muff’s House, he mentioned the Prisoner, as one of the filthy Wretches who resorted there, to committ sodomitical Practices, and accordingly, when they went to search the House, they found the Prisoner amongst the ludicrous Company.

The Jury found him Guilty of the Assault and Misdemeanor. 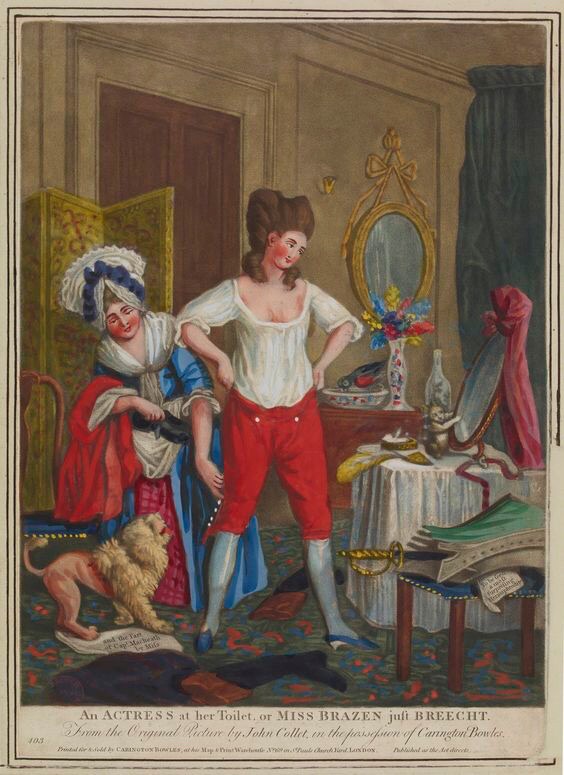 5 October 1728
On Sunday Night last a Constable with proper Assistants, searched the House of Jonathan Muff, alias Miss Muff, in Black-Lyon Yard, near Whitechapel Church, where they apprehended nine male Ladies, including the Man of the House. They were secured that Night in New Prison, and Monday Morning they were examined before Justice Jackson, in Ayliff-streeet; John Bleak Cawlend was committed to Newgate, he being charged on Oath with committing the detestable Sin of Sodomy. One of them was committed to Bridewell, and Miss Muff, with the other Six were committed to New Prison for Misdemeanors. (The Weekly Journal; or, British Gazetteer)

5 October 1728
Jonathan alias Miss Muff, and nine Male Ladies were all apprehended last Sunday Night at his House in Black Lyon Yard near White Chapel Church, carried to New Prison, and examin’d next Day before a Magistrate, when J. Bleak Cawland charged on Oath with committing the detestable Sin of Sodomy, was committed to Newgate, another to Bridewell, and Miss Muff with the other six to Newgate: Two Persons were also catch’d in that horrid Act last Week at Redding [i.e. Reading, Berkshire]; one of whom was immediately pump’d, thrown into a Bog-House, and then rinsed in stinking Ditches; what will come of the other Beast is not said. (The Flying-Post: or, The Weekly Medley)

19 October 1728
On Thursday … a Bill of Indictment was found at the Old Baily, against one Cowland, for Sodomy.
The same Morning, two Persons were taken in the Act of Sodomy, in the little Cloisters at Westminster-Abbey, and committed to Prison.
And other Bills are found at Hick’s Hall, against divers other Persons, for Sodomitical Practices. (The Weekly Journal; or, British Gazetteer)

26 October 1728
Monday the Sessions ended at the Old Baily, when, with what received Sentence of Death last Saturday, there are 16 Capitally convicted, viz. … John Bleak Cowland for Sodomy …
John Burgess, for Sodomitical Practices, was fin’d five Marks, and order’d to find Sureties for his Good Behaviour for six Months.
Two others indicted for Sodomitical Practices were acquitted. (The Weekly Journal; or, British Gazetteer)
9 November 1728
Saturday last … one John Mitchel stood in the Pillory in Little Britain, pursuant to his Sentence at Guild-Hall, for threatning to swear Sodomy against a Person, in order to extort Money from him; he is also to suffer three Months Imprisonment. (Weekly Journal, or the British Gazetteer) [This was also reported in The Flying-Post: or, The Weekly Medley.]
9 November 1728
Last Wednesday Night the dead Warrant came to Newgate for the Execution of thirteen Malefactors condemned last Sessions at the Old-Bailey, on Monday next at Tyburn, …
But John Bleake Cowland, Samuel Lewis, and John Taylor, are respited ’till his Majesty’s Pleasure, touching them, be further known. (The Weekly Journal; or, British Gazetteer) [The Flying-Post on this day also reported that although John Bleak Cowland was condemned for sodomy, he was reprieved and not executed.]
.