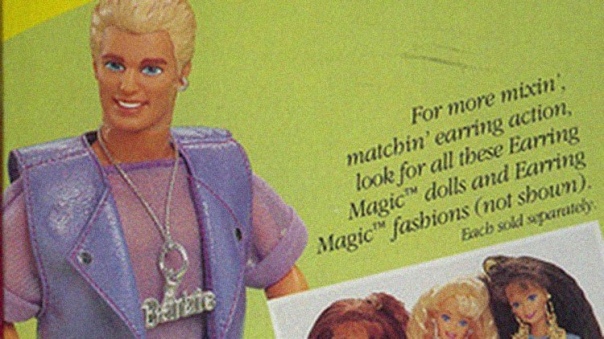 Remember when Mattel accidentally made a super gay Ken doll? We do. And queer people made him the best selling Ken doll, ever.

The year is 1993. Barbie is cool as shit, but her boyfriend Ken…not so much. Way less outfits, way less adventures, and with cool dudes like G.I. Joe and the New Kids on the Block fashion dolls to woo the blonde bombshell over, Ken’s chances weren’t looking great. Mattel needed to do something, and stat. So they surveyed a bunch of five year olds who definitely knew what cool was and made a whole new Ken, ready to burst out of the closet and say hi to the world.

Chrome cock ring necklace and all.

You may be shocked to find out that children have a very easily influenced idea of what’s cool. The quizzed little girls that Mattel surveyed were more than happy to repeat back what they saw as cool (mainly whatever was airing on the then still-newish MTV), but five years olds aren’t exactly known for their in-depth understanding of social trends, gender norms, and the general cultural climate. So they had no idea that say, Madonna’s cool back up dancers, were actually gay AF.

And that’s how we ended up with Earring Magic Ken, a companion to Earring Magic Barbie clad in a purple mesh shirt, a purple leather vest, wearing a big, shiny, silver ring around his neck. While he fits into some gay stereotypes, (especially from the early ’90s), it’s the necklace that really got everyone’s attention.

As gay author and journalist Dan Savage explains in a column about the doll from 1993, in the late ’80s and early ’90s, besides being a sex toy, a cock ring was the queer fashion statement of the time. Leather daddies wore them stitched to their vests. Lesbians wore them as zipper pulls. Placement on clothing communicated secret preferences to those in the know, much like pierced ears at the time (Ken does have that “straight” at least). And many, many people wore them around their necks as a necklace. Ken included. The accessory was a staple of the gay club culture that was blowing up at the time, a scene Ken would fit right into with his leather/mesh ensemble. 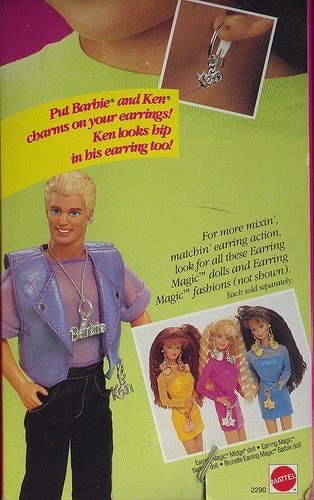 Obviously, none of those little girls told the Mattel researchers that they wanted Ken to wear a cock ring around his neck. It is probably true that the adults designing the doll saw the fashion out of context and never thought to dig deeper. Mattel staunchly denies the doll was intended to have anything to do with homosexuality at all. The early ’90s was a time when queer culture was just starting to blossom in the open, still reeling from the horror of the AIDS crisis. Queer culture and pop culture were beginning to mingle in a way they hadn’t before, and Earring Magic Ken is an example of what happens when you pay attention to the what of trends and not the why.

Mattel, who has never been pleased about this connection, rushed to discontinue the dolls. However, the story spread faster than them, and sales for the doll spiked, making him the best selling Ken doll ever. Some even claim the best selling Barbie model ever, but as Mattel is unwilling to discuss our friend Ken’s current status, that title goes to Total Hair Barbie (released the year before).

Still, he will always have his little place in history as the time Barbie supported her boyfriend in exploring his homosexual tendencies. Who knew Barbie was such a cool girlfriend?

Mattel has been manufacturing its Barbie dolls since 1959. Shortly thereafter, it began producing dolls of Barbie’s boyfriend, Ken. Girls really liked Barbie, and the doll became a certifiable cultural force, but Ken dolls never sold as well. In an effort to increase sales of Ken dolls in the early ’90s, Mattel’s research department worked with a group of 5-year-old girls to find out what might make them more likely to nag their parents to buy one.

This workshop of young girls, inspired by images and music videos they’d seen on the then-culture-defining MTV music video network, wanted Ken to have a cool, new look, as author Matt Haig detailed in his book “Brand Failures: The Truth About the 100 Biggest Branding Mistakes of All Time.” And what “cool” meant to 5-year-olds who’d seen MTV was maybe a mesh shirt. And a leather vest. And an earring, and tight pants. Oh, and maybe a flashy necklace, too.

The minds at Mattel went on to produce this version of Ken and in 1993, Earring Magic Ken was born. He wore a lavender mesh shirt, a matching purple leather vest, hip-hugging black jeans, and even had a new earring at a time when men having pierced ears in the United States was still somewhat risqué. Ken, just like the other dolls in the Earring Magic collection, even came with a human-sized clip-on earring for the kids to wear.

Ken even had a flashy, circular chrome ring dangling around his neck. But Mattel’s choice for Ken’s necklace would cause a row that the company would soon regret. That’s because a panel of 5-year-olds generally isn’t sophisticated enough to parse the subversion of gender norms, to understand the flouting of traditional masculinity, to ken the coded language of underground fashion — or to predict the cluelessness of toy designers.

At this time, we should point readers who’d rather avoid more graphic discussion of human sexuality in another direction. Perhaps you’d like to read about solar eclipses, or how 3-D printing works? You also could learn whether a giant squid could actually defeat a submarine. But if you’re sticking around beyond this paragraph, things get a little more adult.

“He’s always read gay,” said Dan Savage, internationally renowned columnist and podcaster, in an email, “but has he ever read gayer than he did with a gay sex toy around his neck?”

Savage originally wrote about Earring Magic Ken in the summer of 1993, when much of the pop culture world was having a good laugh at Mattel’s lack of understanding that while little kids saw what Prince, the members of Right Said Fred or Madonna’s backup dancers were wearing simply as “cool,” the adult world was clued in to how gay it was.

The doll flew off the shelves, especially since gay men, including Savage, rushed out to buy a Ken doll. The kitsch factor drove Earring Magic Ken to become the best-selling Ken doll at the time. We reached out to Mattel for comment multiple times — to find out just how well the doll sold and whether it remains the No. 1 Ken, as well as for the current regime’s take on this piece of corporate history — but they did not return our requests.

Though the Earring Magic Ken incident showed that LGBTQ culture at the time had infiltrated the mainstream (or, arguably, been co-opted by it), Ken might’ve simply remained the butt of late-night jokes until Savage — who’s since gone on to serve as one of the country’s most prominent sex and relationship advice columnists — published his explanation of the gay-culture subtext communicated by wearing the sex toy.

As Savage outlined back in the 1990s, the chrome metal ring used as a sex toy was also worn as a fashion accessory among certain subsets of the queer community. The rings were used as necklaces, bracelets, zipper-pulls, and worn just about anywhere else they could be attached. And in a form of code, specific placements on clothing could imply certain sexual preferences among the gay crowd; you can read Savage’s more detailed account of the nuances in the Chicago Reader’s archives.

Mattel quickly pulled the dolls from the shelves and apologized for the error. Clearly, it was not their intention to associate a child’s doll with an adult sex accessory.

Ultimately, Savage thinks the Earring Magic Ken incident is more of an amusing cultural blip than some kind of important moment, noting that neither the doll nor the hubbub is well-known today. “I don’t think a gay man under 40 would even know what we we’re talking about,” he said.

Adam McDonald is a 36-year-old gay man and film critic for the Bored as Hell podcast. “I have no idea what you’re talking about,” he said when asked about Earring Magic Ken.

Dan Savage still has his Earring Magic Ken doll, though. When asked him about it, he quickly emailed a brand-new photograph of it, sex toy and all, proving that it had left at least some impression — if nothing other than as a relic of a unique time in quickly changing American popular culture.