This article, recently resurrected, was originally written in 2012, as I sat in the loungeroom at Ashgrove (Brisbane) after a panic attack drove me from my bed at 5am. I have revised & reedited the piece to cover the period between then and now. The original was published in “Talkabout” in 2012.

I shouldn’t actually be alive! And if it had been any time other than when it was – 1996 – that would have been the outcome. However, timing and medicine are everything, or so it seemed in that period of huge leaps in HIV care and treatment. As a 42-year-old HIV+ gay man who was admitted to Prince Henry Hospital (now closed) at La Perouse in Sydney, weighing in at 48kg, with chronic CMV retinitis, chronic anemia, chronic candida and 10 CD4’s I guess you could say I wasn’t well, and the truth be known my thoughts were more attuned to the after-life than being given a future. So, blood transfusions happened, heavy dosing of drugs happened (curtesy of my current regimen) and gancyclovir injections into the eyes happened – but perhaps most importantl…the new protease inhibitors happened and in combination with my other drugs created miracles. My severely depleted CD4 count did a small, slow rise, and my 100,000 viral load slowlt dropped to 10,000. Though still very weak and sick, I walked out of Prince Henry a couple of weeks later, then spent the next 18 months getting my health – physical & mental – back on track.

At this stage I could crap on endlessly about all the strategies that I used, the anabolic steroid therapy to treat Wasting Syndrome, the fears and uncertainties, the sheer strength of will needed to reconnect with life, not to mention the huge mental shift that drove my life off into uncharted territory and resulted in the man I am today. Blah, blah, blah!So instead of boring you with all that, I want to concentrate on the one aspect of all this that is still impacting my life today – the CMV retinitis.

Say CMV to most people these days and you will just get a blank look. It is an insidious disease, and one that was greatly feared in the era of rampaging AIDS infections. It is a virus that pretty well everyone has present in their body, but is usually only activated in immune-suppressed people. In its retinitis form it attacks the retina, and can spread to the macula by slowly destroying the cells. It is painless, though can be evidenced by a greying of vision and the appearance of floaters. If untreated it will eventually lead to blindness. By the time it was detected in my eyes a lot of damage had already been done, and I was aggressively treated with intraocular injections of gancyclovir…yes, that does mean injections directly into the eye. What fun! At the time this was going on, they were looking for guinea pigs to trial gancyclovir implants – called Vitrasert implants – in each eye. I volunteered, had two operations to insert them, then found that the 4% chance of developing cataracts turned out to be 100%, so back for another two operations to remove them, and replace the lenses, plus some laser work. The end result of all these operations and expectations for me was that they hadn’t caught it in time in the left eye, and despite a tiny sliver of vision I was effectively blind in that eye. Despite a lot of scar tissue, the majority of sight was saved in the right eye at that time. 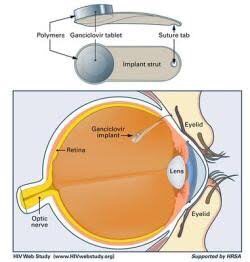 It takes ages to adapt to changed vision, especially when one eye is effectively blind, so over the next 12 months I became accustomed to having accidents, including several falls thanks to tree roots bulging through pavements and bus seats that were just out of sight range. It gets to a point where you no longer get embarrassed. Both eyes appeared to stabilise, I adjusted to the changed vision and in some respects life went on. Apart from the falling over, other negative issues included an avoidance of crowds and busy places, and 3-D cinema was a total waste of time. You do adapt strategies, but it is not yourself that you need to worry about, but other people. There have been a number of occasions where I thought a tee-shirt emblazoned with the words “Vision-Impaired Person” would have been handy.

However, this is good old HIV we are dealing with here, and it doesn’t like being ignored. Just as you think the worst of your problems are over it throws another bit of shit at you. I had been told previously that with the amount of scar tissue present in my good eye that there was a real chance of the retina detaching. So, shortly after moving to Brisbane, when the good eye started swapping between clear and blurred vision and finally settling on blurred, I knew something was wrong. A visit to A&E (on ANZAC day 2012) resulted in no clear result, so off to the RBH Eye Clinic the following day. The retina was off, and floating around, and there was a scare, with them thinking the CMV had reactivated…hard to believe seeing as I wasn’t immune suppressed, had a high CD4 count and an undetectable viral load – and another scare when they realised that I had highly toxic implants in my eyes (though long inactive, as they discovered). Instead of collecting some eye drops and toddling back home as I expected, I was put straight into a ward, and within 24 hours was in the operating theatre. A bad recovery room experience with an Asian Nurse Ratchet, whereby they weren’t informed that I was blind in my left eye, and leaving me to come-to in total blackness, occasioning a major panic attack is something I could have done without. The ongoing problems of anxiety and panic attacks (and this article being written at 5am) is something I am slowly getting over thanks to counselling and a letter to RBH formally requesting they look at the procedures and communication in the recovery room. My vision is now officially classified as blind. Glasses help a bit, but it is now a matter of me adapting to a low-vision life and devising some new strategies to deal with it. I can still read, though the font is huge, obviously I can still write though currently using huge fonts to do it. In 2013 I attended Southbank Institute of Technology to do the Certificate III in Fitness. I am not only the first 59yo to do the Certificate…I am the first severely vision-impaired person to do it. Threw TAFE into a panic, as they had to develop strategies to deal with me, and make sure tutors were on-board and up to speed. As much as I loved the experience, and the youngsters around me were absolutely wonderful, I came to realise that I was way too slow at moving around a gym to be a PT, so went no further. Atthe same time, I had done white cane training, and though finding the canes handy in certain circumstances – like whacking my way through the city – it is, as a general rule, more a hindrance than a help. However, it is great for getting seats on public transport!

In early 2015, after ongoing problems with my blind eye, and not wanting to go on infinitum with drops, I opted to have my blind eye removed. Unlike the old days, they now put an artificial ball into the socket, and attach the muscles to it, so it moves like a real eye. I had a prosthetic fitted, and to date no one has detected that it’s artificial.
However, my vision in general is now very severely impaired. Every trip outside my front door is a potential suicide mission – not to nention ducking and weaving around two Jack Russell Terriers at home…but I still challenge the risks, and get out and about under my own steam as often as possible. If anyone wants to date me…I’m a high maintenance date these days. Being night blind, I need to be guided around, and I move very slowly and cautiously. However, it has been pointed out to me that I can still spot a hot butt from some distance away! Some Gay traits over-ride everything! 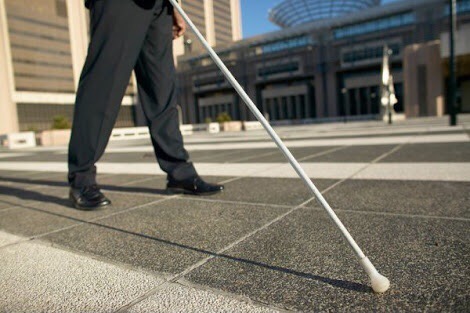 As for the future… who knows. I am trying to develop the “living in the moment” way of my dogs by just taking each day as it comes. I have had a lot of help and support, and despite whatever may happen that will always be there.

As they say, there are none so blind as those who will not see! I still walk my dogs every morning, I still read & write, still do my genealogy and my DJ mixes, go to gym, do the shopping, get around to local restaurants and cafes so I can’t complain. Life should always be an empowering experience, and the best way to achieve that is to own your disabilities – instead of letting both HIV and disabilities rule your life…YOU rule your HIV and disabilities! That is the road to freedom! 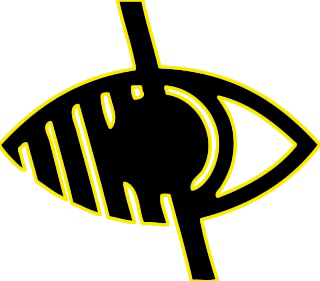 6 thoughts on “An Eye For An Eye – Life After Cytomegalovirus Retinitis (CMV Retinitis).”