HOw quickly our Abbott government seems to be back-pedaling on its “Stop the Boats”  policies, in the face of thecurrent public backlash about the plight of Syrian refugees. Considering the claim they were voted into power  on the basis of this policy – well, in their own minds anyway – the fact that the entire Australian population may not be behind them on this issue must come as a shock! Considering they have cut back on refugee intake numbers anyway, and have tried – unsuccessfully – to legitamise their inhumane proposal shows a bit of grubbiness, as anything they do now will be seen as a grab-for-votes as the next election looms ever closer. Abbott himself has no scruples, humanity or compassion as far as the refugee situation goes. His blinkered reasoning, and immoral comments on the devastating events unfolding in Greece, Italy, Germany and Austrua at the moment shows a “leader” out of touch, and about to tumble off the world stage. 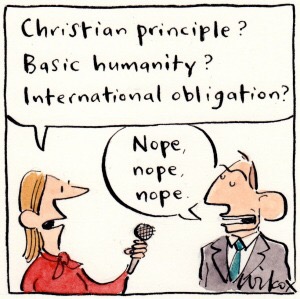